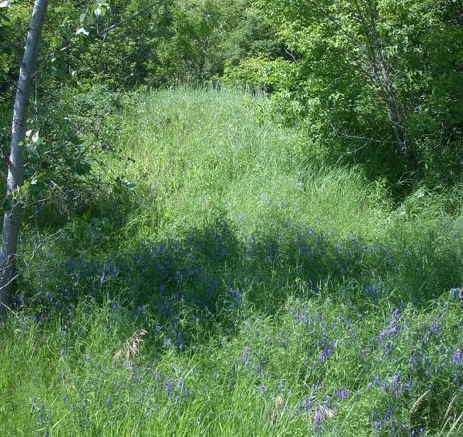 Green and purple complementing one another in Mill Creek

A spectacular day. Not too terribly hot, but warm enough to feel like mid-summer. Could have gone to Heritage Days, but opted to stay in this part of the river valley where I know I can find shade and there are more dragonflies than humans. It’s not that I don’t enjoy watching hordes of sweaty people eating something unrecognizable off a stick, but I’ve been to the event many times and my days in Mill Creek are coming to an end, at least temporarily. Once I’ve had a snootful of Whitemud Creek, I’ll be back.

Walked over to Riverdale today, backwards to my usual route: Mill Creek, McKinney, Riverdale, McNally, 98 Ave path, Muttart, and then back to Mill Creek, instead of the other way around. I sure do love me some Riverdale. Such a quiet, comfortable neighbourhood,

with just the right amount of eccentricity. There are some crazy gardeners over there, which is awesome. Still a bit of construction near the Dawson Bridge, but it did not impede my progress.

Made a point of walking along the monkey path between the 98 Ave path and the Cloverdale Bridge. The river has really dropped in the last few days, and ‘Seagull Island’ has re-emerged from the depths of the mighty North Saskatchewan. Just a sprinkling of gulls on it’s shores, and not much squawking which was unusual.

About a two hour walk. Feeling a bit crispy. Not as crispy as something unrecognizable on a stick, however.