Overflowing the banks near the Cloverdale Footbridge

I thought they were kidding. The news people. The river really is high…gobsmackingly high. I’ve been watching the Big Muddy for many years, and let me tell ya, this is spectacular. A canal near the south end of the Cloverdale Footbridge acts as a kind of off-ramp for the water when it overruns the bank. It’s dry most of the year, and some years it never sees river water. As of this afternoon, you can’t even see the canal; the entire area is flooded. And the river is running so fast, it’s extremely loud (and incredibly close) as it slices by the cement pillars of the bridge. Even the riverboat is moored just slightly east of the boat dock because, well, I’m not quite sure. I’m guessing because the current would knock the boat against the dock, which is almost underwater anyway. I don’t mean to be insensitive to anyone whose basement has been flooded, but extreme weather is exciting, and in the end all this rain is of great benefit to our drought-stressed trees. Also, rain is nice. 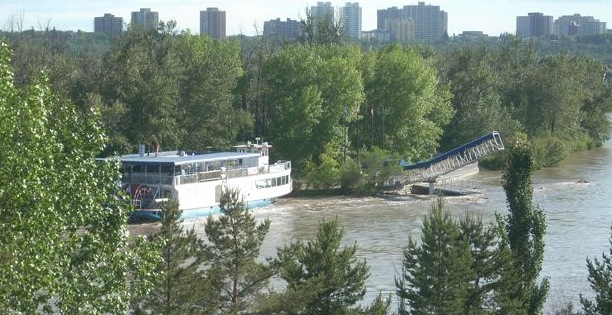 The Queen is cast aside

On the other hand, when you’re leaving work and you’ve spent the entire day thinking about an afternoon walk, rain is not nice. Someone offering you a ride home is nice. Going for a walk a half hour after you’ve arrived home, had some waffles, and watched the clouds give way to sun is very, very nice.

Being housebound for almost a week, a walk takes on a singular purpose: exercise. Hoofing it is all well and good, not to mention necessary, but being out in the woods when millions of water droplets are shimmering in the sun, and worm-stuffed robins are singing so joyfully in the treetops, it’s tough to hold on to that single-minded purpose. Slowing down is inevitable. A racing heart calms. Shoulders relax. I had to remind myself to pick up the pace. A bit.

Surprisingly, Mill Creek was full but not as full, or as fast as I’ve seen it, especially during spring run-off. However, I missed the cresting, which was probably yesterday. There was flattened, wet grass high up on the banks, almost two feet higher. That would have been something to see.

Oh, and Happy Summer! Longest day of the year. Wheee….