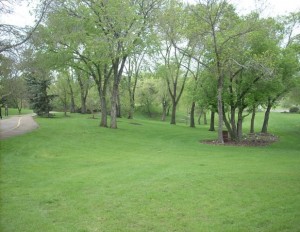 a deeper shade of green

The pools are open!

It’s 5C and drizzly this Victoria Day long weekend. I don’t think anyone is going swimming.

I took a circuitous path into the river valley because I had to stop by work. Today is the first day of my two week vacation, and I was at work. Work! But just for a few minutes. I forgot to enable my out of office thingy on Friday. Obviously, the excitement of not being at work for 14 days overwhelmed my deep-fried brain. However, if I didn’t have that errand to run, I might not have tagged a walk to the end of it. It’s been raining off and on today. I had my hood on, then off, my umbrella up, then down. The last 20 minutes of the walk was sunny. Even though I was repeatedly teased by the capriciousness of the weather, it was lovely. 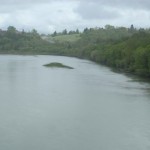 I know I’ve said this before, but really, the smell of wet spring foliage is just ridiculously beautiful. And yes, I’ve said this before too, but the city is green, green, green. It’s like the Maritimes, or the English countryside. Even the North Saskatchewan is much higher than it was. That island where the seagulls screech at one another is almost entirely submerged. This is good.

Today is Hip Hop in the Park, which takes place at Louise McKinney Park. I walked by it, but the crowds were sparse. Too early, I suppose, but the music was thumping and the rappers were rapping. I remember wandering by the same event last year and hearing one of the performers shout motherfu#!%$ over and over again. The reverberation throughout the river valley was kind of thrilling. I mean, who hasn’t had that fantasy of standing in the middle of the river valley  and shouting motherfu#!% at the top of your lungs?  I know I have.