Emily Murphy Park, the scene of my almost-death

I take it back. There is still some ice and snow in Edmonton, and I found it. Lots of it. Between Emily Murphy and the Kinsmen, just below the University. That path can be iffy at the best of times. It’s at the bottom of  a hill and runs along the North Saskatchewan. In the summer, it’s downright tropical with huge ferns and humidity. And now? Pure ice. Some guy saw me inching my way down a hill and said, ‘Icy?’  Just at that moment, I had to grab on to some wire fencing to catch myself from falling into the river. I prefer to act out my responses to dumb questions. He just shrugged his shoulders, and carried on.

After a morning of shopping along Whyte Ave, I asked my friend Barb to drop me off at the Laurier off-leash, just for a change. So many dogs, so few hands. I fondled as many as I could, but turned away just as many. Got a schedule to keep. Over to Hawrelak where I was immediately met by the smell of woodsmoke. Nice. Also, lots and lots of people, and geese. And seagulls. And ducks. 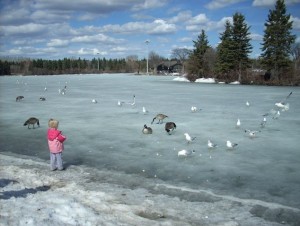 Go ahead kid, they don't bite and the ice won't break

There seemed to be simultaneous turf wars going on between the geese, and also between the geese  and the seagulls but I didn’t stick around for  the beaks to start flying. The lake is still frozen, and it was a bit incongruous to see people walking around in shorts while ducks skidded on the ice. Even the ducks had a WTF expression on their ducky faces.

Left this bucolic scene for the 20 minute luge through Emily Murphy, and then home. Just under two hours. It was indeed, a nice change, and great to see all that dog and bird life.