Was over at my sister’s place on Saturday to take Stella for a walk. The original intention was to drive us to the Whitemud trail head in Westbrook and hit the ravine under blue skies (wishful thinking), but the meteorological gods had different plans, presenting us with life-sucking rain-snow, grey skies and low visibility. Actually, the whole day kind of sucked. I was supposed to take delivery of my beautiful new sofa in the morning, but it was too big for the elevator and the stairs too narrow, so I had to switch it out for a love seat, which will arrive (hopefully) next Saturday. In any case, with my sister away for the weekend, I thought a walk with the doggie, who I miss terribly, would turn the day around but within three minutes I wiped out on the ice. Seconds later, Stella wiped out in front of me. I hadn’t even managed to haul myself off the ground yet. I landed on my elbow and my cell phone went flying. Luckily, no broken bones, but it hurt like hell. (The bruise is turning out quite nicely, however.) Poor Stella, she limped for a bit, but managed to walk it off within a few minutes. The next day, Sharon and I noticed that she had also cut herself under her chin!

This winter gets a D-. Do you hear that winter? Multiple freeze-thaw cycles, icy sidewalks and long stretches of frigid weather. You could say that’s a typical winter, but not really. The ice has been particularly treacherous this year, and long-lasting.  I, along with every Edmontonian, will be so fucking glad when this winter shuffles off to whence it came.

After the fall, the rest of the walk was OK. Stella had fun running after the ball, and at one point, she just dropped to the ground and starting rolling around, luxuriating in her snow bath. During her month-long vacay in Scottsdale with Sharon in February, her daily routine involved a play n’ splash in a local public fountain. She LOVES water, but she also loves snow. Burying her ball, leaping into the snowbanks. She’s an outdoorsy girl. 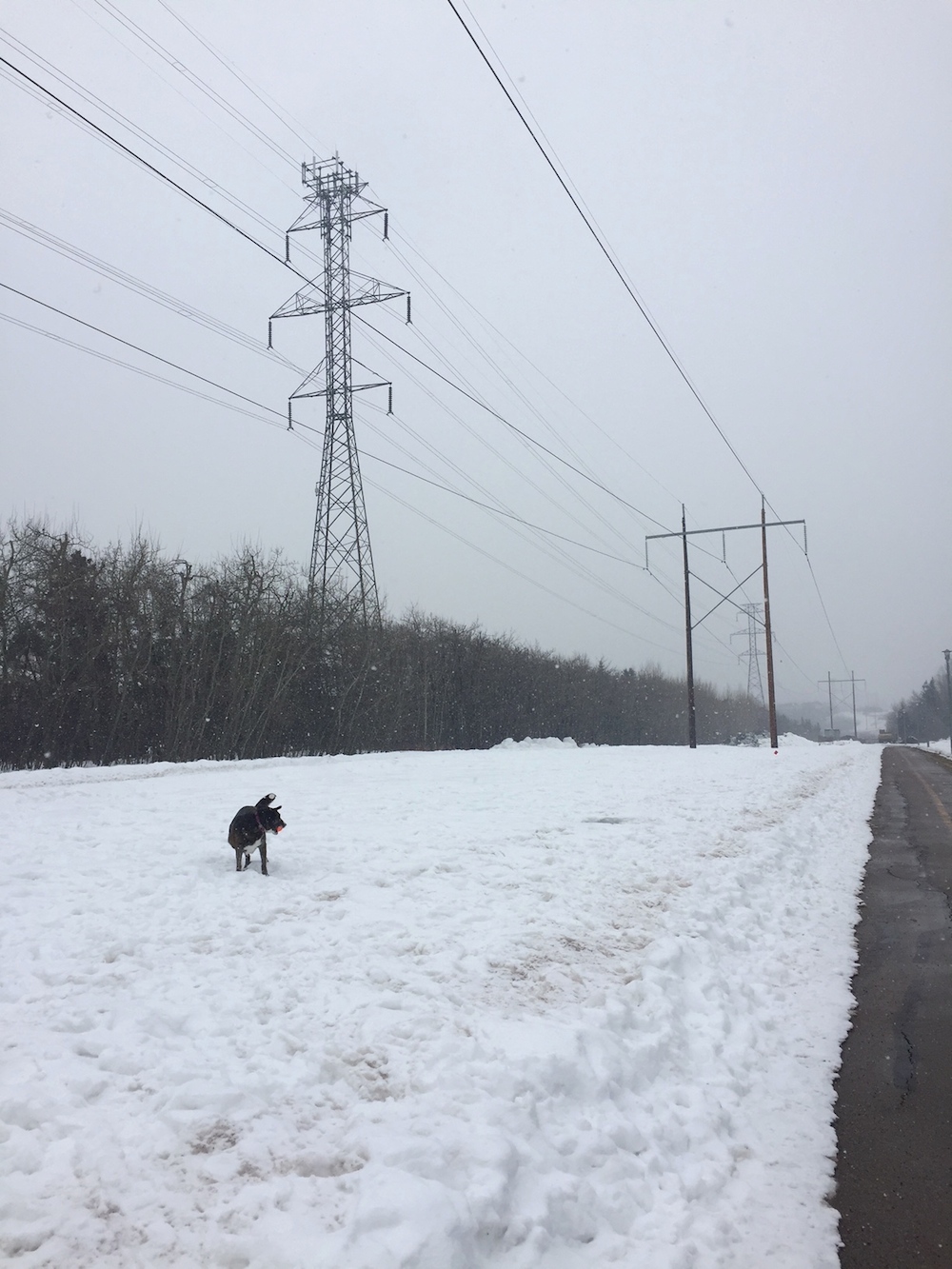 I haven’t quite returned to my daily walking commutes. There have been after-work things to do, so in the nine work-days I have had in my new place thus far, I’ve only walked home about three. Bad Donna. When I do start walking in the river valley this week, it will be with spikes.