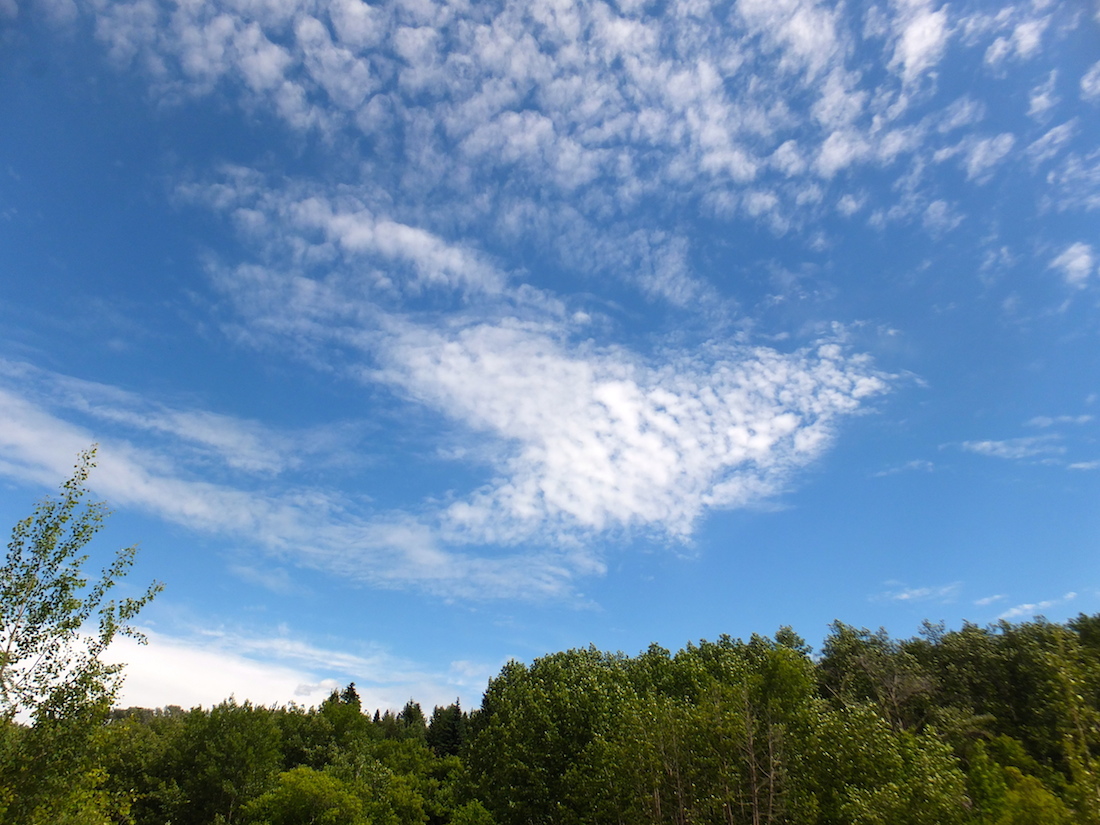 Happy Solstice! Sunrise: 5:04 am/Sunset: 10:07 pm – more than 17 hours of sunlight, bracketed by many minutes of twilight on either end. Not bragging or anything, but living in the north does have its advantages. It’s not all about snow.

No boiled potatoes, naked dancing ’round a monolith or a variety pack of herring today, but we did go for a long walk along the river by Fort Edmonton Park. For Maggie’s sake, we drove to the park rather than starting from the Savage Centre. It’s a very lush path. Later in summer, it’s full of saskatoons, but now, just thick greenery, with little variation on the trail. Straight and flat, for the most part. Reminded me a bit of the path between the Kinsmen and Emily Murphy Park, except that one is right on the river. I know, I’ve fallen into it (in the winter.) 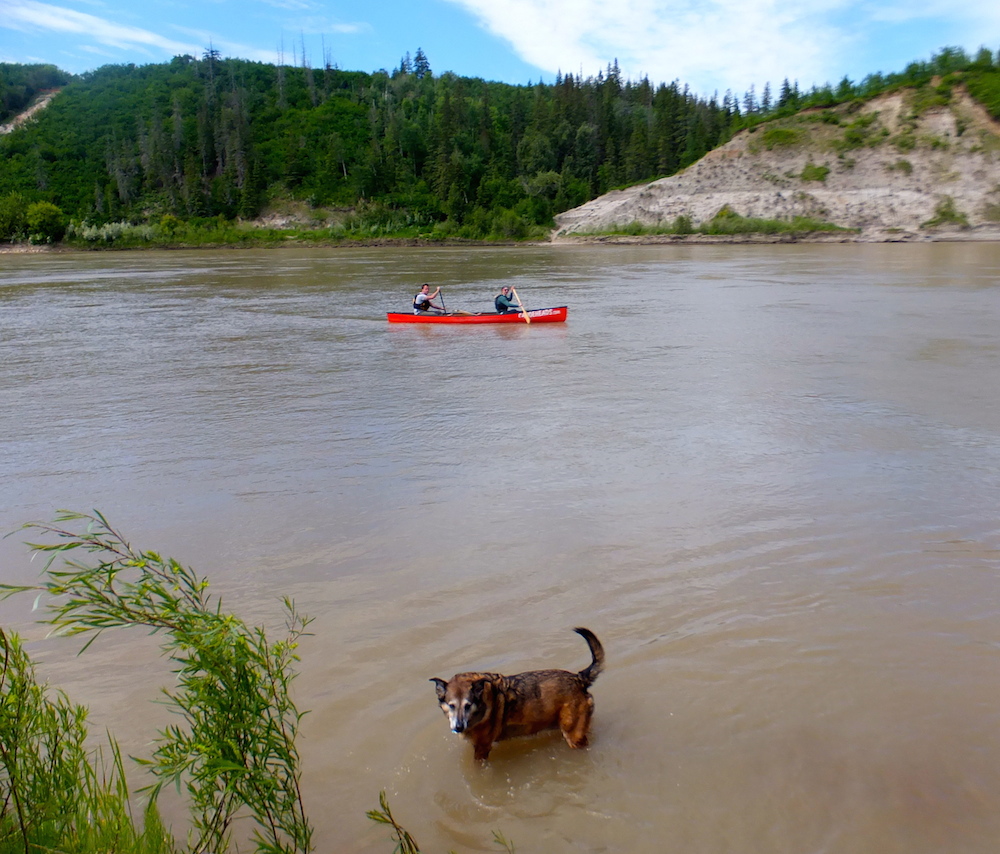 It was awhile before Maggie was able to find a place to jump into the fast-running river, but once she did, as per usual she perked right up. Prior to that, a lot of false starts to the river and ensuing dirty l

ooks from the dog along the way. In the span of five minutes, we saw a canoe, a motorboat, and another dog on other side of the river doing the same thing Maggie was doing, except this dog was swimming, and Maggie only wades. We walked as far as the Fort Edmonton Park Footbridge. In total, about an hour plus walk on a warm, but very windy day.

The skies were lovely – scuttering clouds against a cobalt blue sky.

Wind aside, it was a very summery day, for the last day of spring.

Addendum: Forgot to mention, we ran into an older couple walking their…motorized toy cars! I said, “My, those are flat, colourful dogs you have.” They laughed. Apparently they run these things along the trails all the time, and they’re probably in their 70’s! “The cars don’t pee, and I don’t have to pick up their poop.” True enough. Awesome couple. Lots of laughs. 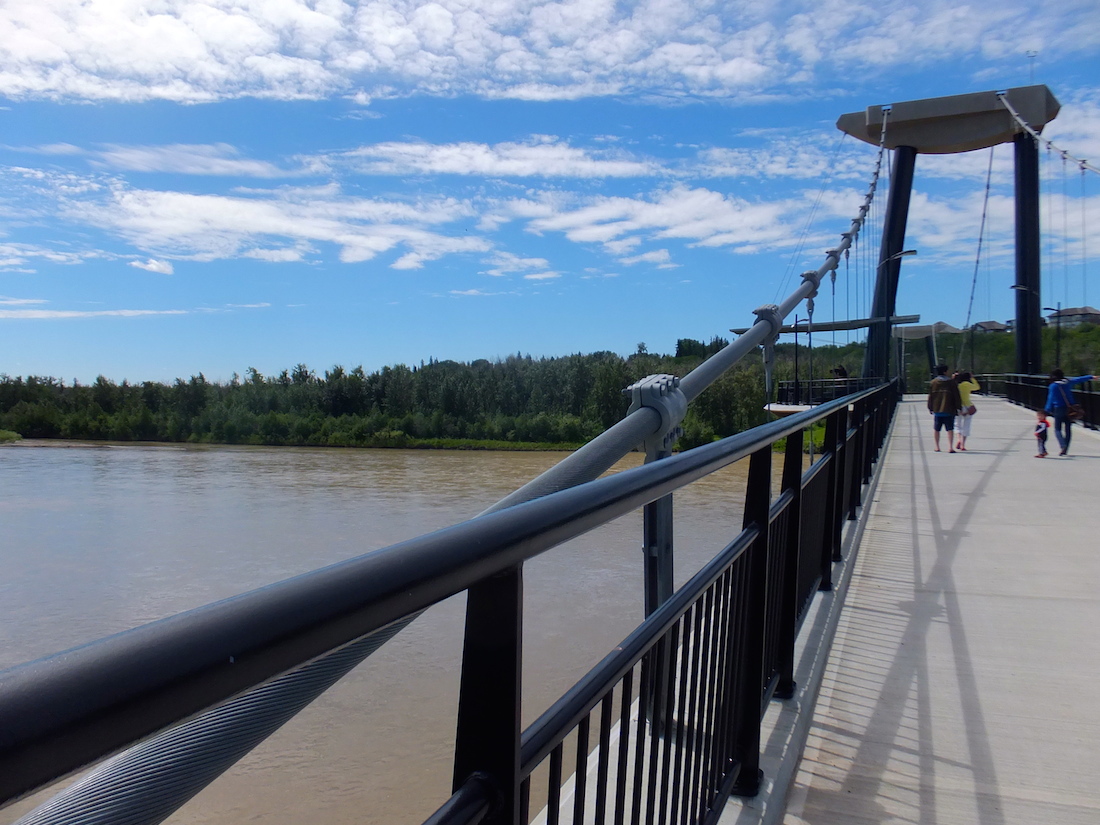