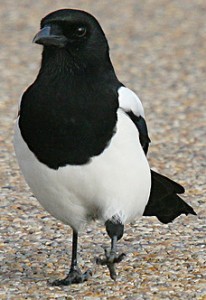 Walked through my old neighbourhood yesterday. Nothing much has changed, but I was chuffed to see all the magpies. I don’t think they like the ‘burbs. I keep putting peanuts out on the deck, and it takes days for them to disappear, if the squirrels don’t get there first. When I lived in Old Strathcona/Mill Creek, I would be attacked as soon as I opened a bag of nuts. Maybe ‘attacked’ is not quite the word, but I could hear the communiques go out as soon as the whiff of nut hit the air, and between the blue jays and the magpies, the peanuts would be gone in 15 minutes.

Anyway, walking down 99 Street in the direction of Rossdale, I was suprised to see how little things have changed, in spite of seven months of construction. The path is wider, and has a cement abutment along the edge, which is nice but not particularly attractive. I used to feel as if I was walking in traffic, especially when snow and mud obscured the demarkation between sidewalk and street. There also appears to be some other sort of barrier in a half-finished state along the west side of the path. Just cement block and rebar at the moment. It used to be trees, and a steep drop into the ravine, which is still there but when the snow melts in the spring, a wall is going up. Or so it appears. Once I veered off into the woods, the ‘transformation’ ended. Same old, same old. Beautiful, in other words. Walked in twilight along the trail to Rossdale. The two week whippet-sitting gig continues…