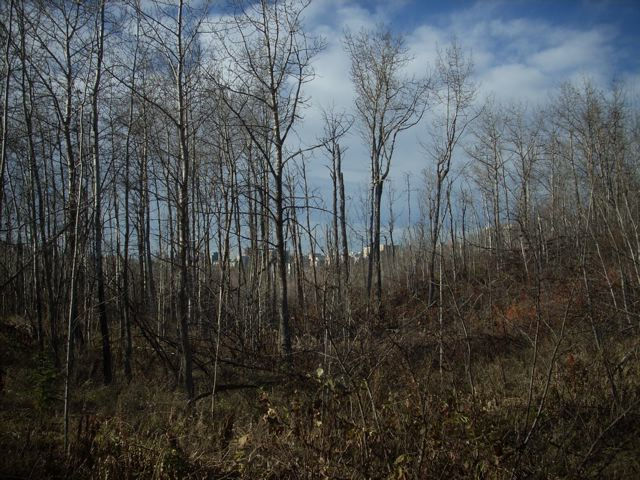 The snow is gone, and so are the leaves

For the last day of October, it was beautiful and sunny. No goblins, as far as I could see, but a few flies, and some geese. Several days of long walks, and I’m starting to feel better. Short sprints and gloomy skies helped to tank my mood over this last week, but this weather rally has rejuvenated my serotonin supplies.

The geese were lovely. I heard them first, as often happens in fall, and when I looked up, one flock was flying in V-formation, but there was another group just behind them, without any formation at all. The two groups moved effortlessly into a long line, and then as if pullled on a string, the line broke into a V. See ya next March, geese. Or April, if you’re smart.

Last week in Louise McKinney Park there was a huge drilling machine, smack in the middle of the rose garden. I can’t say for sure, but I’m assuming this is part of the LRT expansion process. At one of the meetings I attended, there was mention of these drills, which would be used to check the stability of the ground prior to the actual excavation. I hope they found a route-killing geological malformation, or better yet, some sort of artifact laden burial ground, which for different reasons, would also be a route killer (but more interesting.) Preferably something that unleashes a curse on the South-east LRT expansion project. Bubonic plague would be nice, but nothing lethal, of course. Just miserable enough to make the planners reconsider jamming their trains through this part of the river valley.

Saw a lot of disturbed earth over by Connor’s Hill, which was probably the same thing. I think I’ve gone backwards in the Kubler-Ross Five Stages of Grief. I’ve abandoned Anger, and returned to Denial. It’s just so much more pleasant.

Sadly, like the geese, Godzilla has also made his way back to warmer climes. He was gone last week, chopped out of the ice, I think. The snow that fell is now completely gone, but there’s still thick frost in the mornings. I’m sad to see him go, but I understand.