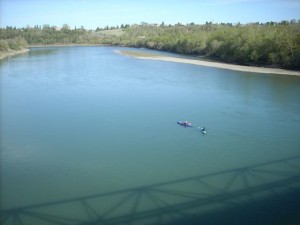 View from a doomed bridge

I suppose I should be angry, and perhaps that will come, but all I feel is sadness. Just attended the workshop for the Southeast LRT extension at the Old Timer’s Cabin. The meeting tonight was for the Downtown to Strathearn route. I was going to say ‘proposed’ route, but in spite of the the presenters pallid efforts to assure us that the routes are not yet ‘set in stone’, it’s clear that the public consultation portion of the planning process is a joke. There was less than 40 people at the meeting, but the folks who did attend were well-informed, if not somewhat resigned.

We were divided into three tables, each table representing the area of most concern to us. I was at the Downtown to Muttart table, with four other people and a ‘facilitator.’ The first sign that things were looking grim was the huge map spread out on the table. It named all the roads and neighbourhoods in the vicinity, including Cloverdale, Riverdale, and various other points of interest, but in the area of Louise McKinney Park, nothing. Just a big, green space with a fat line running through the eastern edge, the fat line being the LRT of course, punching through the hill. The facilitator had a easel with a large pad of paper (no doubt headed for a large shredder)  for our suggestions and concerns, and my first one was that they at least mention Louise McKinney on the damn map. Also, Henrietta Muir Park on the other side of the river. Both parks, and the park area around the Muttart will be greatly impacted by the LRT, and not for the better.

And speaking of the bridge, the current plan is to build an elevated track on top of the existing Cloverdale pedestrian bridge, closing off the open roof, and changing it to the point where it is an entirely different kind of bridge. An LRT bridge. Yes, people will be able to cross it, eventually, and how well it will be integrated into the river valley is up to debate. Not a real debate, of course. And anyway, how well can you integrate a giant metal pig screeching through parkland? You can’t.

The Cloverdale is not the only bridge in the way of the LRT. The bridge over 98th is gone, and so is the one that connects Muttart to Millcreek (crossing over Connor’s Hill.)  New bridges will be built, once again to accommodate the needs of the LRT. However, because construction is likely to be concurrent rather than sequential, accessibility to the river valley trails in this area for at least a couple of years is not guaranteed, and judging by the expression on the facilitator’s face, not something that has even been considered.

It seems that the river valley, and those who use it, are just not relevant concerns for City Council or the LRT extension planning team. The bid for Expo 2017, to quote a like-minded attendee at the workshop, is what’s driving the LRT extension, the specific routes chosen (regardless of viable alternatives), and the speed with which the plan is being executed.

This is not the last blog on the subject.

On a more positive note, when I exited the Old Timer’s Cabin at around 9:00, it had just rained, and the air was cool and head-swimmingly fragrant. The sky was still dark, and with the sun setting behind us, the trees in the river valley were luminously green. After all the hot air today, it was a simply gorgeous end.