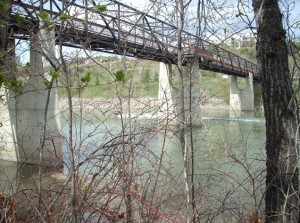 Can’t lay claim to any smugness today. Left for my walk at 11:30, three hours later than yesterday. The trails were packed. Lots of Weimaraners, for some reason.

Took the ‘new’ path that runs along the river near 98th. The apple trees ringing that particular route are still weeks away from full bloom, but the buds are getting pinker every day. Hopefully they’ll blossom just as I begin my spring holidays, which is always the plan, but sometimes they bloom later. This riverbank path leads to the Cloverdale pedestrian bridge, but the path circles around it, rather than directly to it. I created my own shortcut to the bridge by climbing a steep hill full of dead branches and old undergrowth. I’m all about the monkey trails, even if I have to create them myself.

I noticed an older woman straddling two planks on the bridge, with her hands on her hips, staring down at something. I know this posture! She’s looking for the goose nest.

“No, just the eggs. She must have flown away.”

“She’s been gone for over a week now. I’ve been by a bunch of times, and she’s never there.”

The woman looked stricken. “Oh. That’s too bad. I wonder if the babies are still alive?  You know, I think this might have happened last year.”

Etc. We carried on about the geese for quite awhile. And then her husband joined us, and the discussion continued. I don’t know these people, but we fell into an easy conversation based on a mutual enjoyment of Louise McKinney Park and it’s microcosm of seasonal delights. And, it’s not the first time I’ve yapped with total strangers about the geese on this bridge. City Hall, please take note: many people have an intimate relationship with Louise McKinney Park, and this bridge, and all the animals, birds, and plants that live here. The thought that the bridge and a chunk of the park will be destroyed for the new Southeast LRT extension is unfathomable.