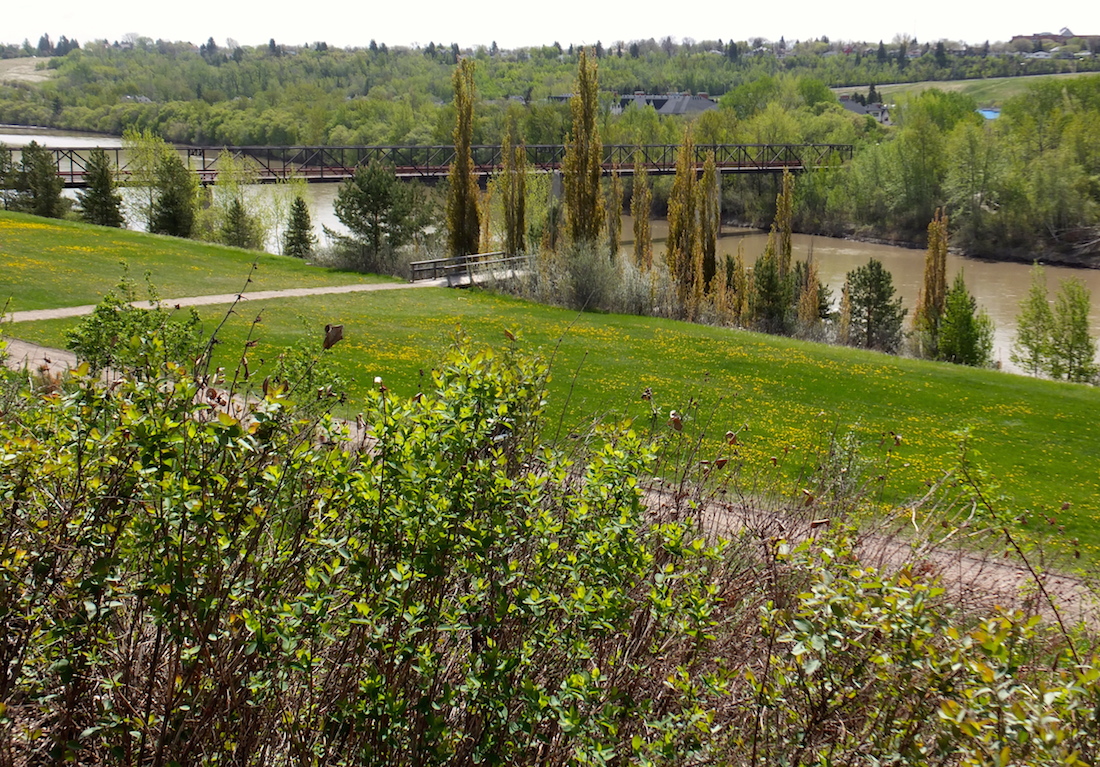 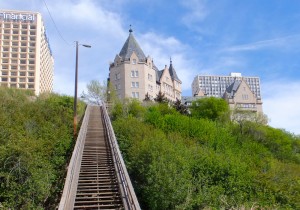 Half way down the stairs below the MacDonald Hotel

With all due respect to the geese (who return far too early), spring in the river valley is largely absent until the second half of May, when the leaves unfurl and the dandelions appear, seemingly overnight. As I made my way down the staircase below the MacDonald Hotel, the morning already warm, the scene that greeted me was like a child’s drawing of nature: a band of blue, a band of green, and a bright sun in the corner of the sky. Broadly descriptive, entirely beautiful. Around the corner on the south side of the Low Level Bridge, the scent of the newly verdant river valley was intensely sweet, and unmistakeable. It is May. Late May. If only photographs were scratch and sniff. 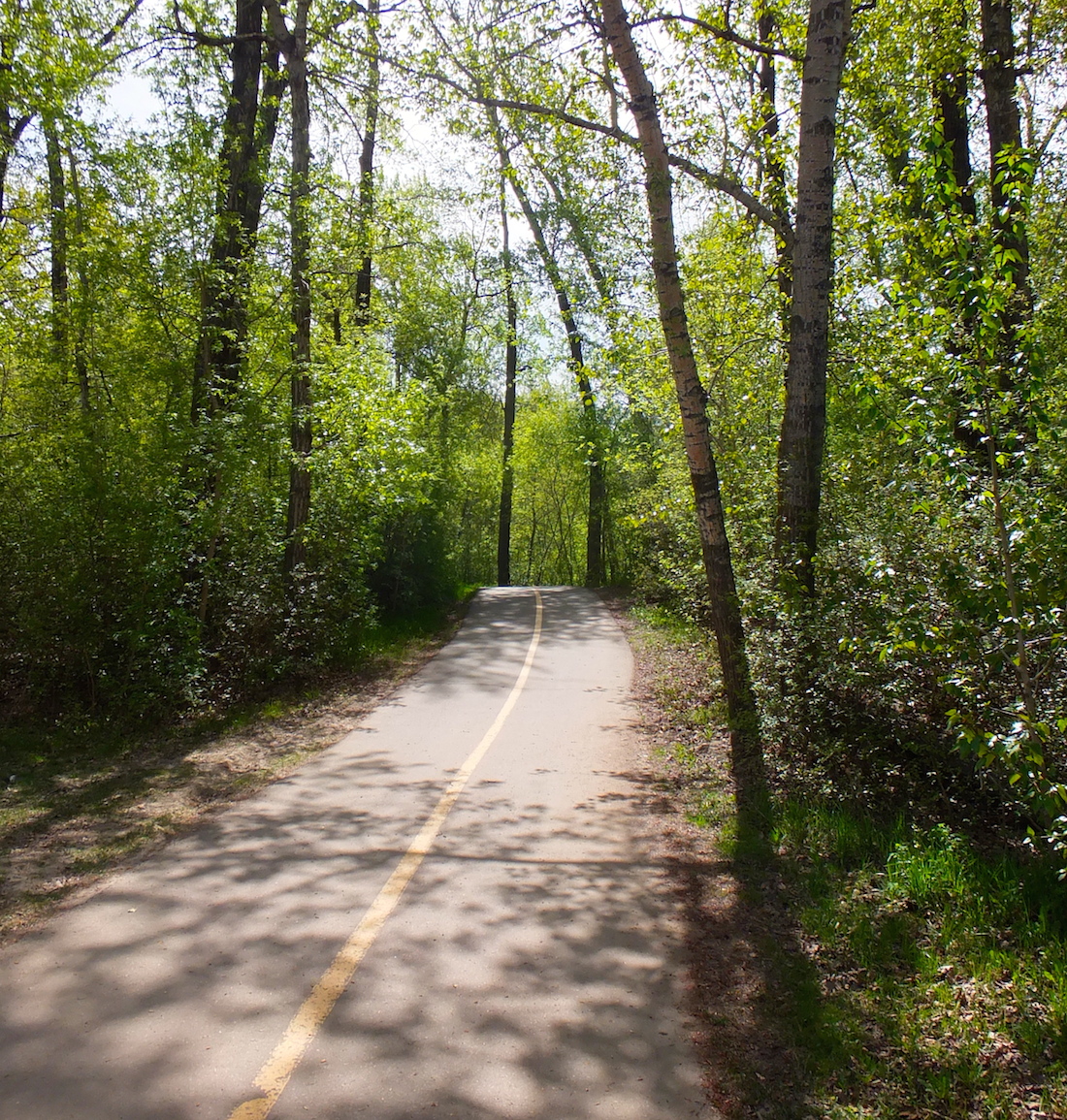 The goal was to walk across the Cloverdale Pedestrian Bridge, like I’ve done a thousand times before, and will continue to do for the finite future of this bridge. In the recent past, I routinely crossed the Cloverdale as part of my commute to my Mill Creek/Strathcona neighbourhood, and yet I need no reason other than my own edification to venture into this part of the river valley. Today, however, I wanted to be counted. The City is monitoring activity on the bridge for a few days. Anything I can do to persuade the men-in-suits that this bridge and the incredibly gorgeous area of the river valley it serves is a key asset to this city, deserving of protection, not development. 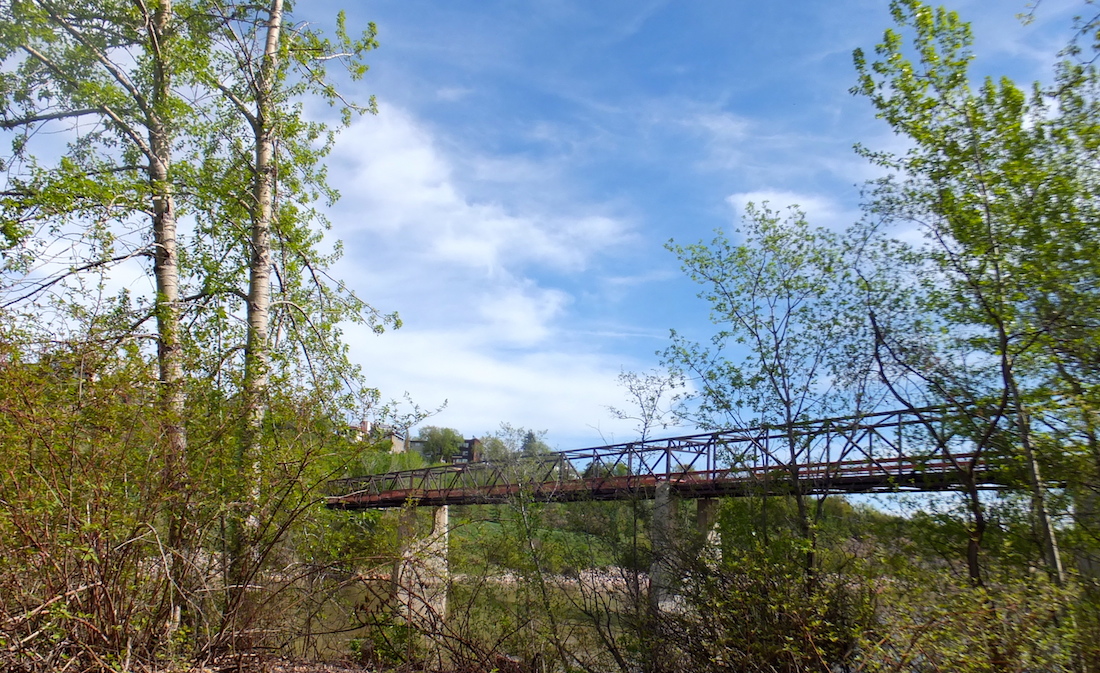 Curiously, the counter is not on all day. There was a guy at the north end of the bridge changing the batteries, and he said the cameras are pre-programmed to go on and off, and that the cameras were now ‘done’ for the morning. I wonder if this program includes the lunch hours? Would it not be beneficial to the transportation department’s position on the fate of the Cloverdale Bridge to show under-usage by only tracking walkers, bikers, runners, and other river valley enjoyists before and/or after peak hours, when numbers are fewer? The meat of the day is between 11:00 PM and 1:00 PM, when downtown’s nature-starved masses pour into Louise McKinney Park and the surrounding trails and parks. Shoulders are lowered, muscles stretched, sore eyes are given unimaginable sights, and a peaceful, recreational time is had by all. I hope they count these people. Also, as a friend pointed out, with construction on the Walterdale Bridge, feeder trails in Rossdale and the Kinsmen are either completely out of bounds, or altered. This will surely have an impact on the number of people using the Cloverdale Bridge. I’m no conspiracy theorist, but it does make me want to know more about the City’s tabulation methods. 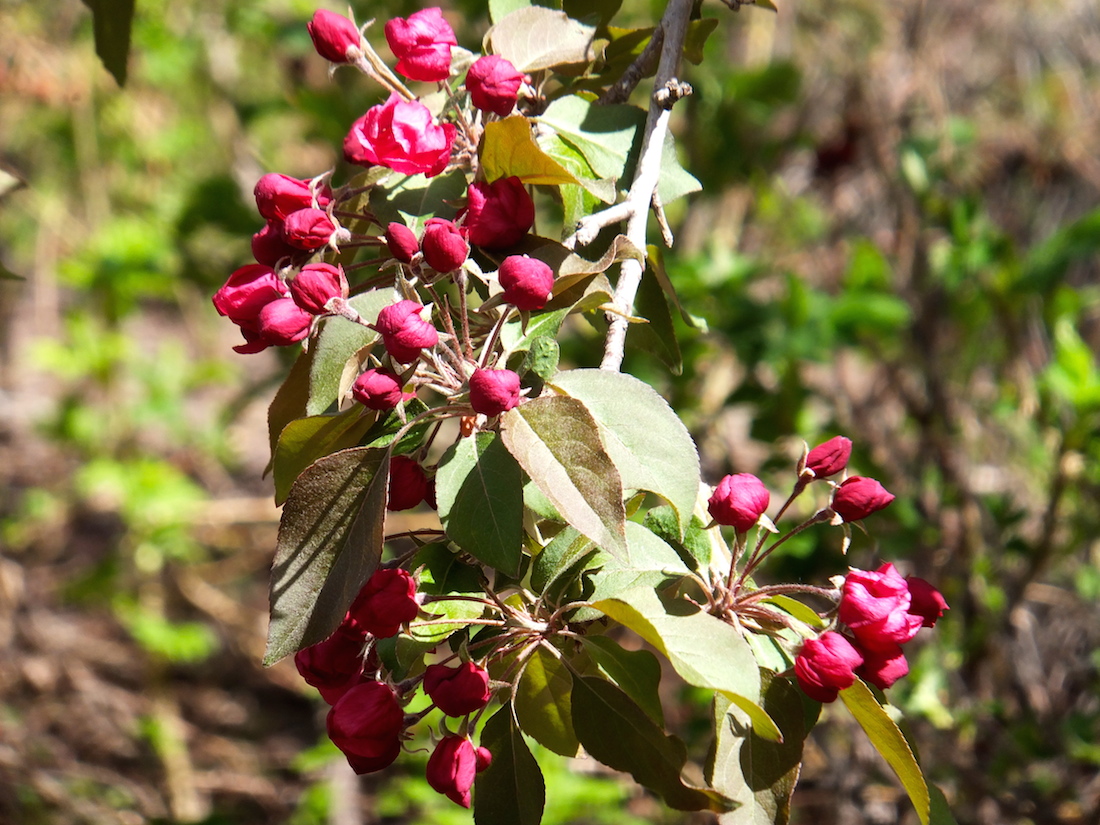 The ‘business’ of this walk completed, I was left with the magnificence of the river valley in late May. Not all the way there yet, but close. The dominate colour is lime, the leaves still weeks from the lush green of mid-summer. The curving rows of apple trees in Louise McKinney Park are in full blush, but have not yet blossomed. More heat, maybe a little rain, and the entire palette will change. It’s a beautiful time of year.

Here is the original notification from the fine folks of the Save Edmonton’s Downtown Footbridge advocacy group: “The City has notified us they are finally setting up cameras on and around the bridge from May 20-25 to gather information on how many pedestrians, cyclists, and people using other modes are using the bridge. On May 27, 28, and 31, they will be on the bridge talking to people about which trails they use to access the bridge, how frequently they use the bridge, and whether they use the bridge recreationally and/or as a commuting link. They’ll also host an online survey from May 20-31 on the Valley Line project website.

HAVE YOUR SAY! Come out to the bridge and complete the survey to let the city know we demand a better way. Not only will their route close the entire area for nearly three years straight, it will permanently destroy a natural section of the river valley and one of our city’s best livable spaces. Save Edmonton’s Downtown Footbridge has come up with a route that enhances the city rather than degrading it and–will save taxpayers tens of thousands of dollars in doing so!”