Day 13 of my two week dog-sitting gig in Rossdale. One more sleep until I’m back in the ‘burbs. I will admit that the first week was difficult. Although I’ve known Eddie for years, to this point I’d never spent the night with him. He’s more of a passing acquaintance, and the cat as well. Lucy is a very nice kitty, but her idiosyncracies were unknown to me. Until now. 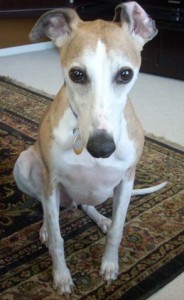 Eddie has his issues. He’s a whippet, and say what you want about their elegant build, and swift-footed gait, they aren’t the brightest of dogs. Those grape-like eyes are not pools of canine thoughtfulness, just more grape. Worst of all, poor Eddie has congestive heart failure, which means he’s on a lot of pills, mostly diuretics. Of course, he won’t take them wrapped up in cheese, or any other treat. Unlike every other member of my family, human and animal, this dog is not driven by food. Aside from having to go elbow-deep in his mouth morning and night to get the pills down his throat, which I don’t really mind, he is occasionally incontinent, which I do mind. And so does his mommy, my sister. And the carpets. They really mind. Hard to say whether these problems are entirely related to the diuretics, because he’s annointed the carpets on more than one occasion, long before he went on the water pills. And of course, on day four there was an ‘anointment’, but not of the carpet. Living out of a suitcase, I’d been using the floor as my closet organizer, and the dog, in an apparent move to establish, or re-establish ownership of the floor, showed my jeans who’s boss. He subdued them, in other words, with his yellow persuasion.

Other than giving my Ralph Lauren’s his special blessing, I don’t think Eddie’s had any accidents (or rather, ‘on-purposes’) while I’ve been here, although a faint odor lingers. I walk him before I leave for work in the morning, and as soon as I get home. I let him out all the time, including (last night, anyway) 12:30 in the morning, and again at 5:30. My other temporary dog, Maggie, will on occasion huff and whimper by the bed in the early hours of the morning, but I ignore it. Inevitably, when I get up, she has to be dragged outdoors to pee. In other words, it’s unclear why dogs do this, other than to deprive their owners of sleep. With Eddie, it’s best to err on the side of caution. And anyway, after years of living with my destructo-cat Molly, I’m not unfamiliar with the pre-sunrise hours. Not that the actual time in bed was any more restful. As a fat-free dog, Eddie likes to spoon, preferably under the covers. However, until he takes me out for dinner and a movie, under the cover canoodling is not an option.

Stretched along my back, his cold snout brushing my neck, Eddie sleeps, and I doze, not wanting to disturb him lest he go wandering around the house, ‘subduing’ the floor. And just when we’re settled in for an uncomfortable night, Lucy jumps on board, walks around to the top of the bed, and proceeds to lick my hair. A rather strange and off-putting habit of hers, and one that requires immediate action. I will say, it’s difficult to hurl a cat without disturbing the dog.

The first week with Eddie was all about hypervigilance. Aside from a slight case of loneliness with a chaser of boredom, my attention was focused on the dog. Being back in the river valley allowed me to resume my on-foot commutes, which was wonderful, but my after-work walk quickly developed an unfamiliar tinge of urgency, a total vibe killer. Gotta get home, let the dog out, check for stains. And then when I’m home, watch that Eddie doesn’t wander where I can’t see him, or squat in a corner while I’m changing channels on my sister’s giant TV. Yeah, that first week I was counting the minutes.

But then something happened. As we got used to each other, a routine was established. The unfamiliar became familiar. With few of my things around me, and my brain cells too dog-centric for reading, I watched TV pretty much non-stop. Eddie would curl up in the blankets on the couch, Lucy on top of the bookcase next to her bowl of kibble (the only place she could eat in peace), and I’d be in the chair, a plate of food or my computer balanced on my lap. Intervention Canada, Hoarders, My 600-Pound Life, and an occasional dip into OASIS HD to watch something warm and green, all enjoyed in the wary company of Lucy and Eddie, my crap TV afficionados. I’d look over at the dog, cocooned in his blankie, balled up to half his size, and if I felt moved, lean over and tuck him in, maybe give him a kiss on his forehead. 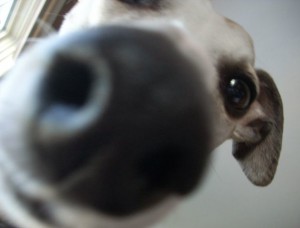 Here’s the thing about whippets: they can bend their bony bodies into all sorts of unlikely shapes. They are born contortionists, not that I am in any way suggesting that Eddie belongs in a Chinese circus. For all his faults, Eddie is a highly watchable dog.

After about a week, the animals claimed dual ownership of me, which in the TV room, took the form of riding shotgun in the chair while we watched our shows. It is particularly vexing to Eddie if Lucy makes it there first, expressing his concern with a series of arawr rawr rawr’s and a stink-eye directed at the cat. To be perfectly honest, the chair was not built for two, especially when one of the two is a whippet. Nevertheless, it’s short term and comforting, if not comfortable.

At some point, the sense of urgency plaguing my commute home switched to anticipation. I raced home, not because I had tasks to perform, but because I wanted to see Eddie and Lucy. The first few days of whippet indifference had given way to unbridled enthusiasm, on both our parts. The walks, somewhat utilitarian, were now fun, even if Eddie could be a little grumpy with unfamiliar canines. Yesterday, we walked around Louise McKinney Park in the bright sunshine, enjoying the warm temperatures and blue skies. Down by the frozen river, I threw a stick, and typically, Eddie ignored it. Perhaps if I’d thrown a rabbit he’d be more interested. Whenever I stopped to take a picture, he leaned against me. Today, our last weekend walk together, we ventured into the same area, but the walk was much shorter. Eddie seemed tired. I have to be careful, in spite of his sprinting abilities, he’s got a bad ticker and shouldn’t be over-exerted. So, on the bridge when he stopped and would go no further, and I mean he STOPPED DEAD, we turned around. Eddie decided he’d had enough of the pebbled pathway, and insisted on walking in the tall grass of the hill where the snow had melted. It’s a steep angle, so I walked on the trail, and Eddie walked to my side in the grass above me, the leash stretched as far as it could go. We’d worked it out.

He’s sleeping now, as is Lucy, quietly snoring on her bookshelf pillow. Affection. That’s what I feel. And I will miss them when I leave tomorrow.

Addendum: Eddie passed away quietly at home on Wednesday, April 11th, at the age of nine. Farewell doggie.