A very sparkly walk in the -2C temperature. The grass was stiff underfoot in the shady areas, diamond-tipped and 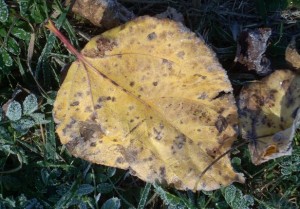 dripping in places where bright beams of sunshine had melted the frost. A gleaming Autumn morning, in other words. One of the many nice things about walking with a dog is that every so often they stop to read their peemail, or write their own. On this crisp morning, these stoppages allowed me to hear the leaves falling, like fat raindrops hitting paper lanterns. The speed of their descent has ramped up with the colder temperatures, and it’s almost as if the leaves are hurling themselves to the ground. In spite of the suicidal overtones, the sound is lovely. On one of the trails in Whitemud Creek, I just stood there listening, long after Maggie’s mission has been completed, and she stood there with me quietly sniffing the air. We indulge each other’s ‘moments.’

Walked up to the little pond. The surface scum has receded, leaving very clear, glassy water. No ducks or other birds this morning. No muskrats, although Maggie and I did see one last week on the creek. Her attempts to catch it resulted in a wet dog and rather spectacular barfing episode along the bank. Not me, the dog. She jumps in with her mouth open, and almost always chokes a bit, or throws up. Today, no such episodes. Lots of running through the frosted, tall grasses along the trails. Not me, the dog. Passed a group of people walking their various pups, one of which was a tiny, samoyed-type dog. Very pretty. Very tethered to the owner, who kept saying, ‘Easy Leonard.’ Apparently Leonard doesn’t play well with others. Maggie just ignored him, but still…awesome name for a dog.