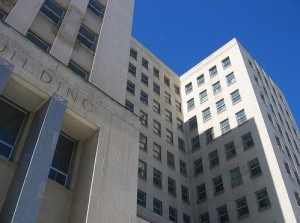 Walked over the High Level Bridge, through downtown to Canada Place, and then into the river valley. Almost two hours of pure, Spring heaven. The entire city smells like blooming Mayday trees. Even a few apple trees are popping their pink buds.

Hadn’t been by the Federal Building on 107th St (in the daylight) for months, and the renos have really progressed. I’ve always loved that 50’s era behemoth, which is saying alot since I hate most of the architecture in Edmonton. It looks like a building you might see in Washington, DC. When I worked downtown in the 90’s, I used to walk by it everyday, and I would imagine Scully and Mulder solving crimes involving giant flukemen and liver-eating sewer dwellers in the basement of that FBI-like building. And in 2011, when it officially reopens, perhaps the new occupants will be engaged in similar activities. Watch out, giant flukemen.