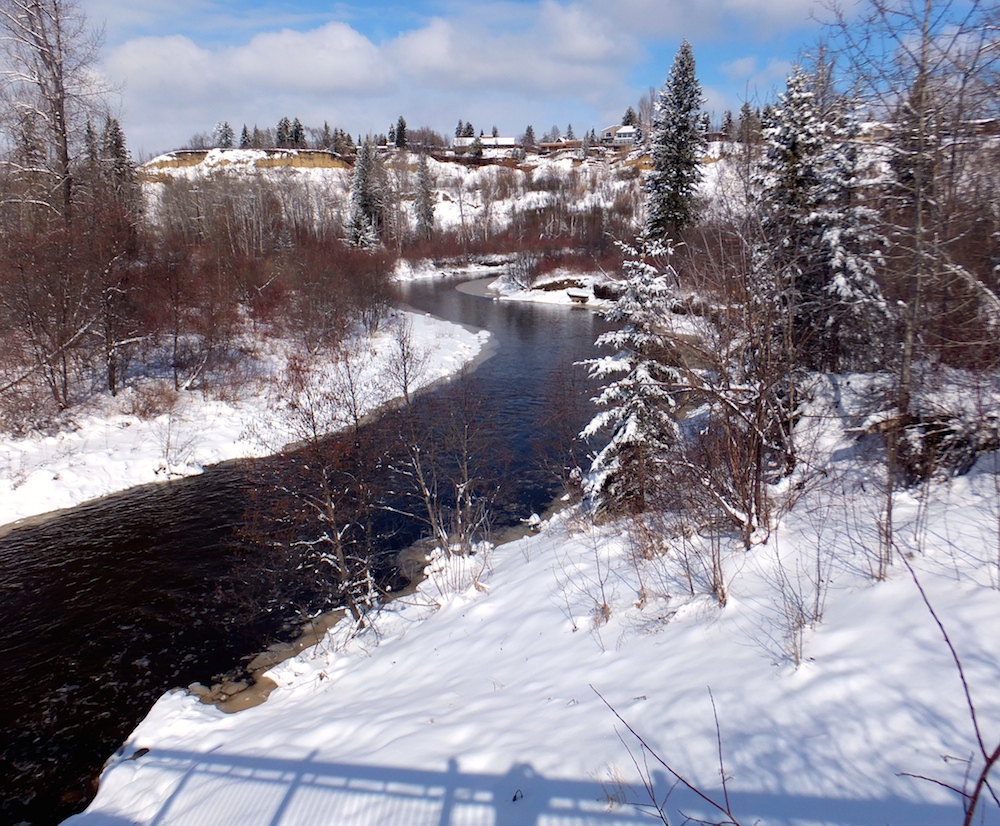 …if you like snow. About 30 cm between Friday to this morning (Sunday). It doesn’t bother me that much because A: it will be bookended by gorgeous spring weather, B: it’s undeniably beautiful, C; there’s f-all I can do about it, and D (most important): the sun is shining. It took an hour and a half to shovel the front driveway and the back deck and paths (for the birds and the dog), and now the driveway is wet and melting under the sun. Maggie was running around the cul de sac, plowing her snout through the snow, which was up to her lady business. Funny how she has enough energy and strength for this, but barely enough some days to take her around the block.

The unplowed ‘sidewalk’ on 119 Street toward the powerline 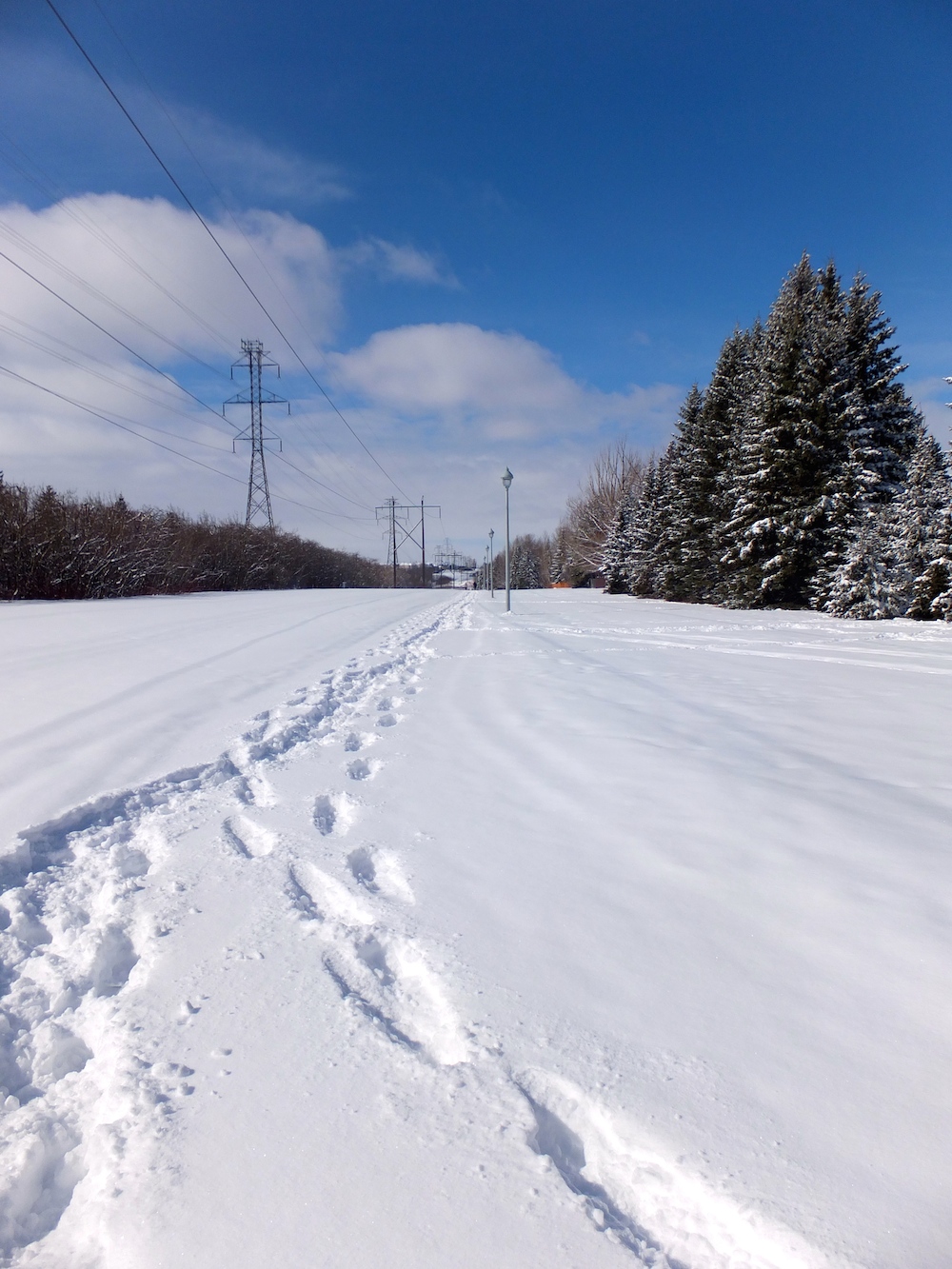 The semi-virginal snows of the powerline

Second one down into the Whitemud Ravine! 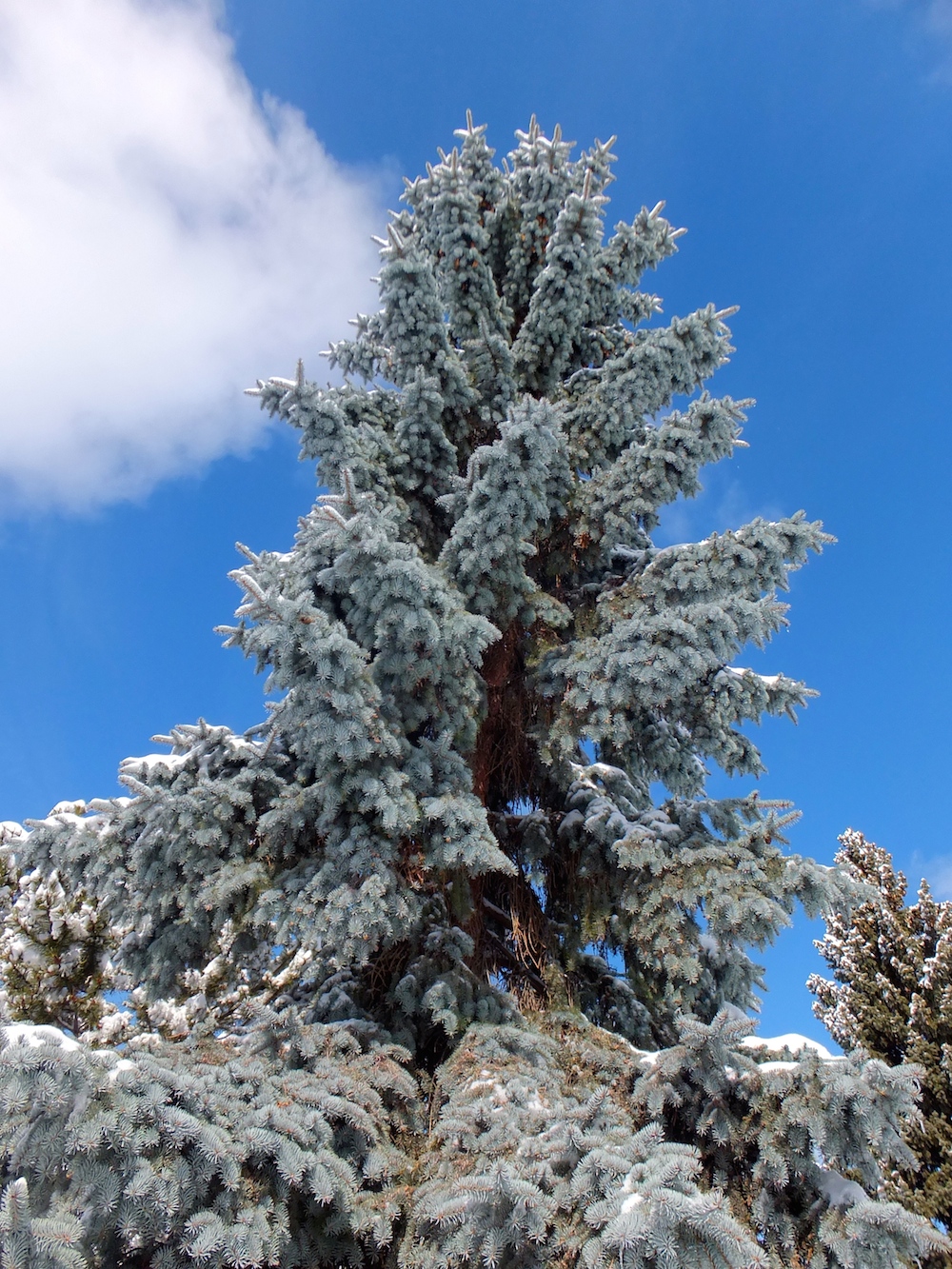 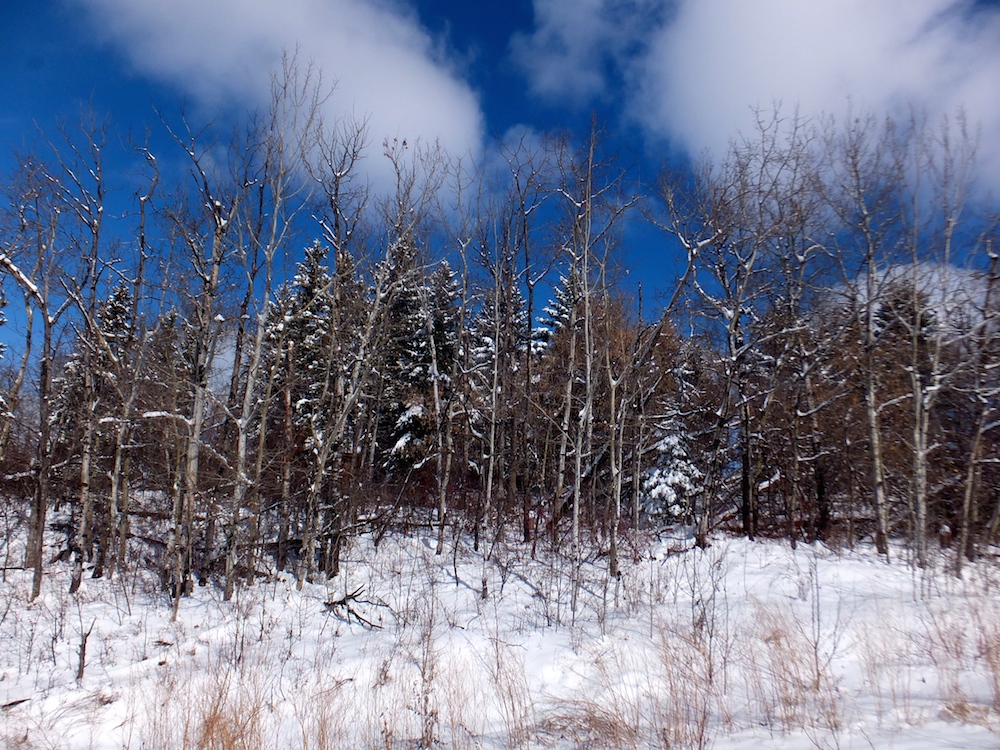 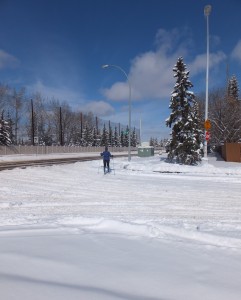 I purposely had an early lunch so that I could get out to the ravine while the sun was at its beamiest. The sidewalk along 119 Street was not plowed, and I passed a cross-country skier on the way to the powerline. It was a lot of heavy snow, but worth the wet socks and leggings. I think I was only the second person to head down into the ravine, which made me feel a little smug (it doesn’t take much). I even ran a bit. The snow was so thick, there was little chance of injury if I fell, and no one around to laugh if I did. Boy, I’ve really missed this! I used to take myself out to Mill Creek Ravine all the time after a fresh snow. At a younger age, Maggie would have LOVED this too, and she would have run all the way down the hill and back up againl. I did see four or five dogs in the hour that I was outside, two of whom I knew (Rusty and Leonard), but still pretty much had the place to myself. It can be a heartbreak when it snows in spring, but even this volume of snow will be gone in a few days – so might as well enjoy it while it’s here! 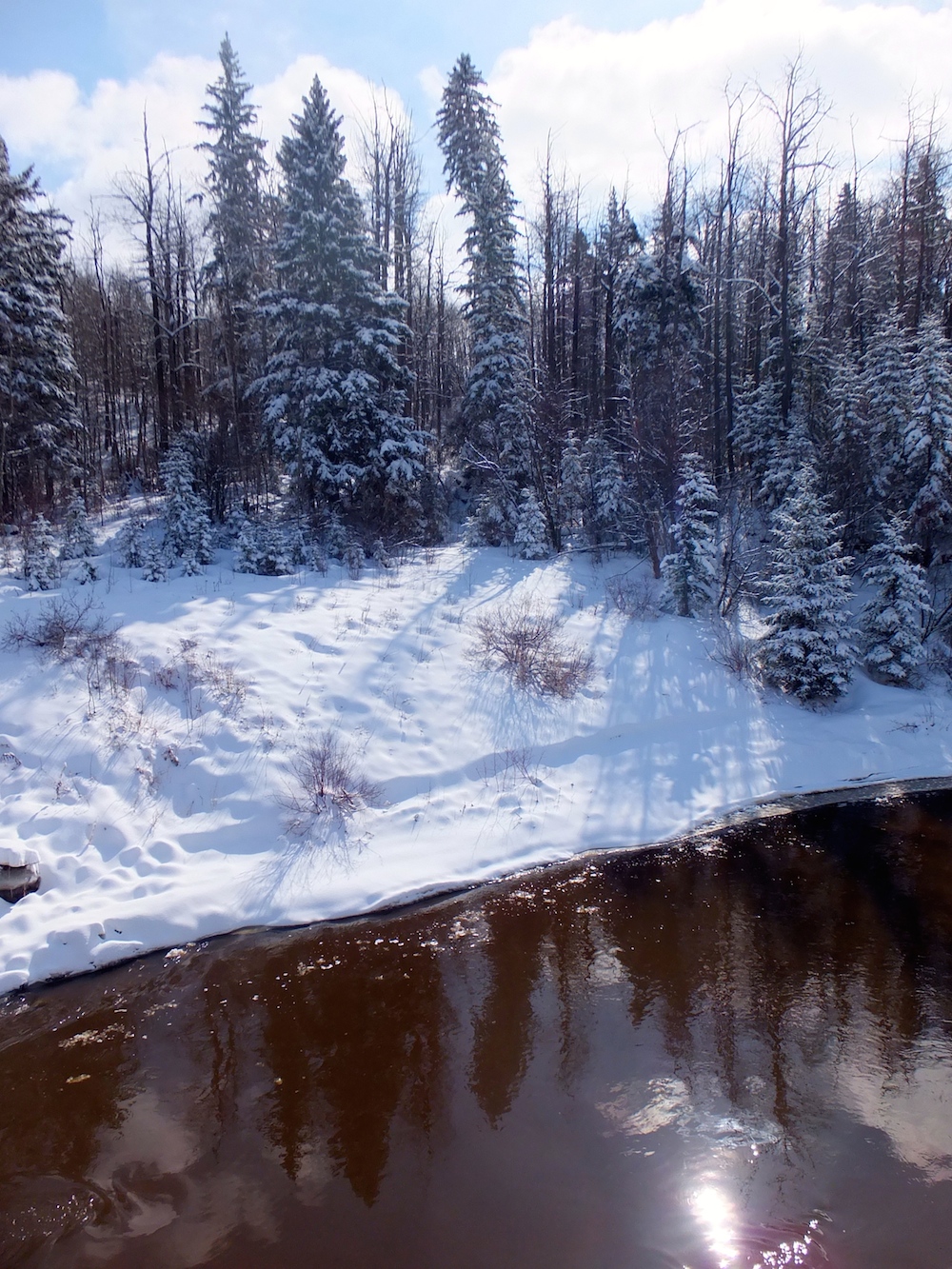 Whitemud(dy brown) Creek over the south side of the bridge 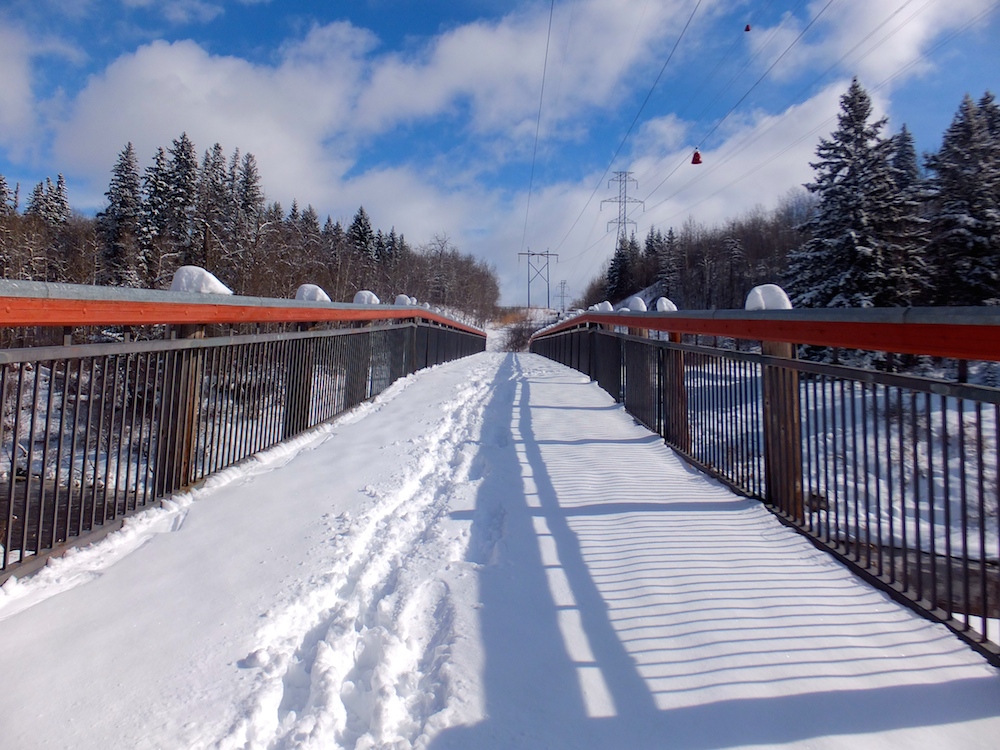 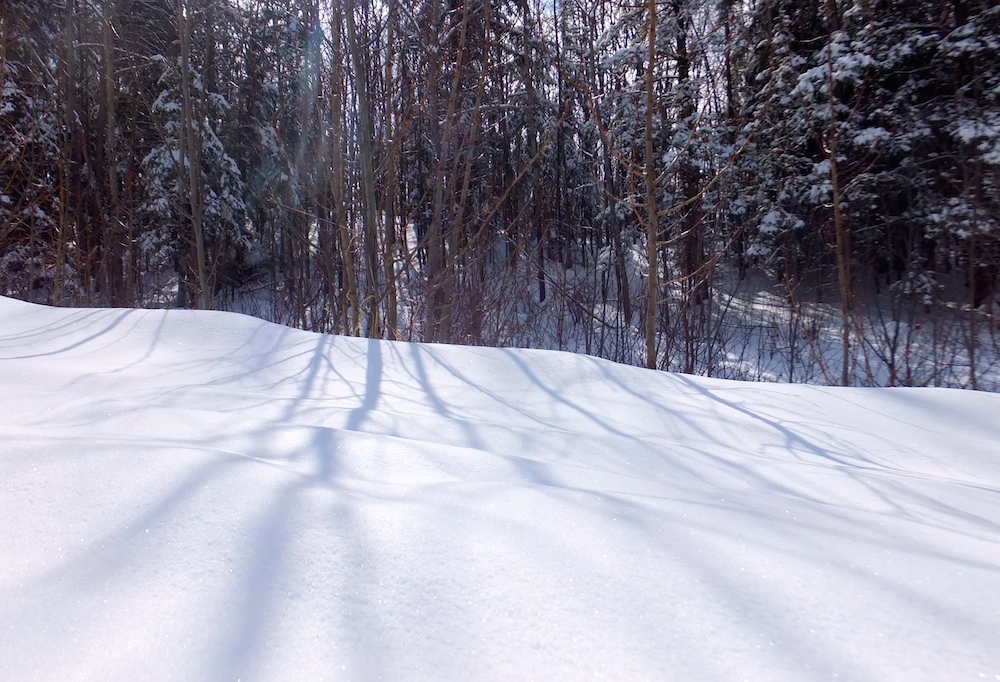