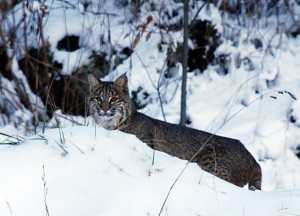 Now that we’ve officially entered the dog-days of winter, by which I mean, the shitty part, I thought I’d use the time I would have spent on the trails to relate my most embarrassing river valley story. This is a real whopper, although for the people who know me, it is neither surprising nor especially unusual.

It happened about three years ago, on a beautiful December afternoon. I was walking home, having been released from work several hours early as a sort of pre-Christmas gift from the boss. I used the time, not to shop or to bake, but to take a long walk in one of my favourite places on earth, Edmonton’s river valley, and in particular, Mill Creek Ravine. It has for many years, been a place of peace and discovery, the scene of coyotes and pileated woodpeckers, and even the occasional moose. A previous nights’ storm had transformed Mill Creek into a breathtaking marshmallowscape. Heaps of sparkling virgin snow piled knee-deep in the ravine, inviting the first perfect footprint. Irresistible.

Walking is my meditation. It’s easy to fall into a kind of altered state while traversing the many winding paths in 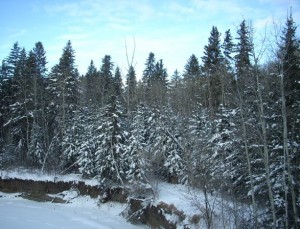 the river valley. The constant birdsong of chickadees and sparrows and the ever-changing landscape is the boreal equivalent of Ommmm, erasing the extraneous and focusing my mind on the moment. In this state, I am apt to believe anything.

While most of the monkey trails in Mill Creek rely on hikers and cross-county skiers to tramp out the routes, the upper path is paved and maintained by the city, so by the time I emerged out of the deepest part of the ravine, breathing heavily from the exertion of wading through a quarter mile of soft-serve ice cream, the trail had already been plowed.

Squeaking along the snow-scraped surface of the trail, admiring the contrast of the cobalt blue sky against white, hoar-frosted spruce trees, I noticed an older gentleman standing by one of the exits to the ravine. Even at a distance, I could see he was angry. His hands were on his hips, and he seemed to be waiting for me, waiting to say something. I did not feel threatened, it was more of a relaxed sort of curiosity. As I approached, the man was shaking his head.

“God-damned bobcat!” he said, his face burnished red from the cold.

“God-damned bobcat knocked over the post.” he said, pointing to the ground.

I looked down and saw a post, bent at a 90-degree angle and laying across the snow.

“Bobcat? You saw…a bobcat?” I couldn’t believe what I was hearing.

“God-damned thing. Came screaming down the path, hell-bent for leather. Don’t care what they destroy!”

“A bobcat? Here? In the river valley?” That is so awesome!” At this point in the conversation I was almost apoplectic, my brain madly flipping through its visual filofax, searching for images of bobcats. Thickly-furred felines with long black tufts on their ears, leaping through Mill Creek, smaller than a mountain lion maybe, but definitely bigger than my 20 pound house cat, flashed before my eyes.

“I had no idea we had bobcats!” I said, flushed with excitement.

The man stared at me, his face contorted in anger but shadowed by what I now know was a nuance of confusion. “Um yeah. About ten minutes ago. I was up on the hill, just over there, and I watched ‘em run over the sign. Started way down the trail and just wouldn’t stop. Unbelievable. If I’d been closer I would have said something, but the damned thing was too fast.”

“That must have been something. Where was he exactly?” I asked, my arm grandly gesturing toward the ravine.

“Just down there.” He pointed to the far end of the trail. “Came barreling through. Good thing no one was on the path.”

“Uh yeah. Except for me, although I was…”

Even through my barely contained joy, I noticed that we seemed strangely out of sync with one another, talking at cross-purposes. The more excited I got, the less vehement his tirade. Clearly, the man wasn’t digging this spectacular new arrival in the river valley. Must be an animal-hater.

I quickly pondered the possibility of searching for the bobcat, but as the mid-winter sun was already setting, I decided to exit the river valley, eager to share my good news with friends and family.

“Really, really fantastic. I’ve never seen a bobcat down here. Thanks for letting me know. Well, have a great afternoon!” I waved. Wow. A bobcat!

“Uh yeah. You too.” The man walked away, looking oddly deflated.

I headed toward the wooden staircase, stepping over the broken sign post. On the first stair, I stopped.

Like the moment in The Usual Suspects when the camera flips from coffee cup to bulletin board and the detective realizes that Kevin Spacey is Kaiser Soze, my mind suddenly and brutally emerged out of its euphoric stupor.

~Edmonton, including its lovely urban river valley, is Oil Country, not Bobcat Country.

~abandoned ravine cats, by species and temperament, are not bobcats, although they may have at one time been named ‘Bob’

~the old man, who in hindsight was understandably angry at the destruction of public property and seeking nothing but a little commiseration with a fellow river valley walker, was not, as I’d assumed, venting his anger at rufus felidae, but at a machine. A skid loader. A snow remover. A Bobcat.

I wanted to run over to the man and tell him that I understood (now) what he’d been talking about, that I was not functionally retarded, that I knew he didn’t mean a large spotted cat but a machine with a cage and a motor and a scraper thing. But, it was too late. I could not unring the dumbbell.

I was so embarrassed, I could barely walk. Bobcat? Oh_my_god. Hot steaming shame oozed out of my pores, turning the once jolly marshmallow snowscape into shriveled goo, sliding off the branches, sticking to my boots, impeding my quick exit out of the god-damned ravine.

Within a few hours, my shame had dissipated to the point where I began to feel just a little, I don’t know, impressed by the gargantuan stupidity of my error. It still impresses me. Years later, the episode has morphed into a kind of badge of dishonour. I am known as ‘bobcat auntie’ to my nieces, to distinguish me from my sister, aka: ‘church auntie’. (Don’t ask…suffice to say public humiliation runs in the family.) When I say things like, ‘You’ll never guess what I just saw!” the answer is always, “A bobcat?”, regardless of the respondent, or the situation. The mental torture is particularly acute in winter, when friends and family bombard me with reports of bobcats roaming the streets of snowy Edmonton. Ah well. I deserve it. I mean, really. A bobcat in Mill Creek? Seriously.