Actually much lighter than it seems in this photo…

When I wrote about sloth in December, I had no idea. Longest stretch ever of not walking. It’s partially to mostly the fault of the weather that I haven’t been out. Correction – I have been out, 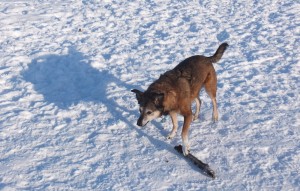 but not for anything that could be considered a ‘good’ walk. Does shoveling count? The dog and I have toodled around the block, and that’s about it. Major cold right after Christmas that only just cleared itself of my head and lungs. Blah, blah, blah. I aim to do better.

Half hour walk in Terwillegar off-leash. The river valley seemed quite a bit cooler and windier than above ground. Nice, though, and paths were lousy with dogs. We are in for a stretch of good weather, so now that the sun is out and I am phlegm-free, no more excuses.