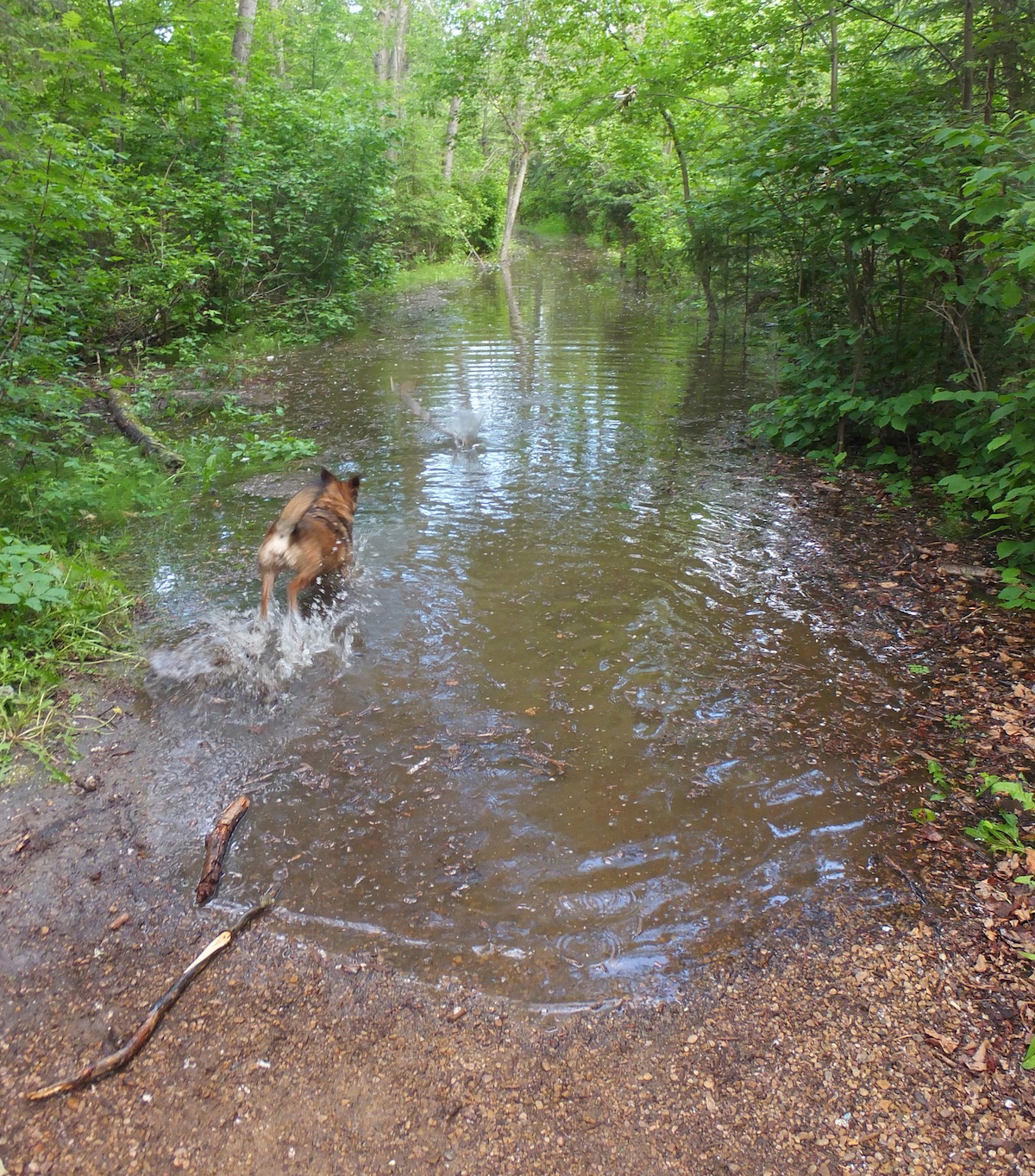 …to quote Peter Gabriel. Not to be glib in light of the catastrophic flooding in southern Alberta, but the North Saskatchewan River is spectacular today. Supposed to crest this afternoon. Being looky-loo’s of the highest order (especially Maggie), we attempted to walk from Ski Valley to the river but were thwarted about half way due to the lack of trail. The trail didn’t disappear, it’s just submerged in a foot or two of water. Whitemud Creek has been squeezed to

bursting from the high, fast-flowing North Saskatchewan. There is no creek bed anymore, just brown water, tall grass, and an ominous silence. The creek is as still as a lake.

Incredibly, it’s because it has been pressured, and ultimately dammed by water! There is no flowing or babbling today, just bloat. So, we piled into the van and rode over to the staircase that leads directly to the park below the Quesnell Bridge, at the Whitemud trailhead where creek meets river. At the bottom of the stairs, the parking lot has been flooded, including a walking bridge and any sort of access to the other side. We were able to walk along the trail that runs along the creek on the east side which crosses over to the river, but just barely. Had to skirt the water creeping near a berm built with sand to keep the water from running into the Alfred H. Savage Centre. 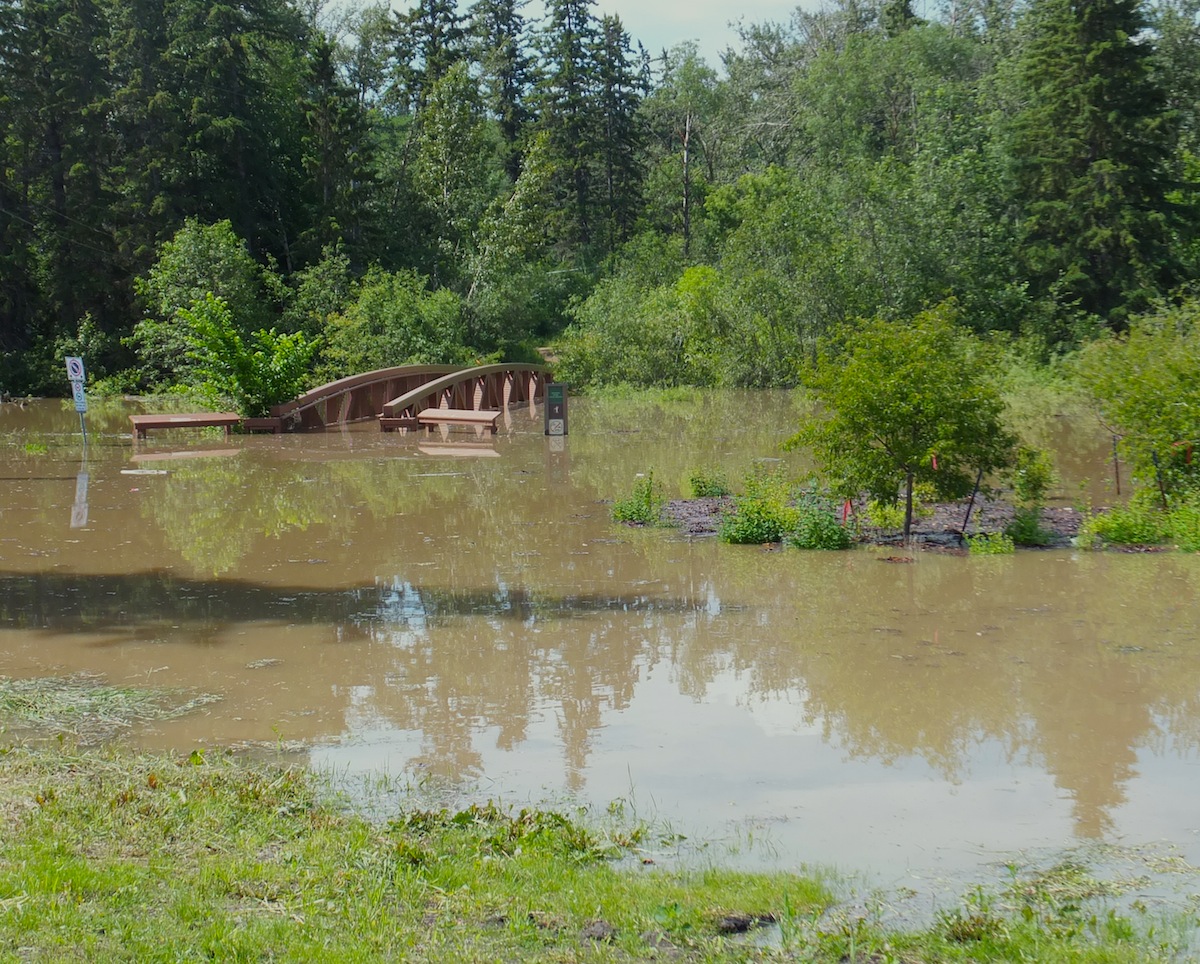 Near the Savage Centre…

Once we were in the park, we could see that the lovely little bridge that lies between Whitemud Park, and the trail that runs around Fort Edmonton was cut off by water on the east side. It’s one big dirty lake. Worse…there was a fire truck with water rescue guys parked in front of the North Saskatchewan, and another firetruck on the Quesnell. Don’t know if someone fell in (tragic), or was kayaking down the river (dumb), but they eventually cleared their gear and took off to the High Level Bridge (or so the radio chatter suggested.) I was surprised the area wasn’t cordoned off, especially if something bad had happened, but no one said anything to the 30 or so people standing around taking pictures of the river. It may have been something to do with the triathlon going on in the city today. As I write this (two hours after the walk), there are no reports of injuries on the water.

It’s been a week of surprises. Who knew Calgary could flood like that? All the schools, including the university, will remain closed on Monday (as on Friday), and the downtown area is completely under water. There is heightened awareness in Edmonton because of what’s happened down south, but our river valley is deeper than in Calgary, and we don’t have the volume of mountain run-off, or the 100mm of rain to flood our city. Still, it’s awe-inspiring. 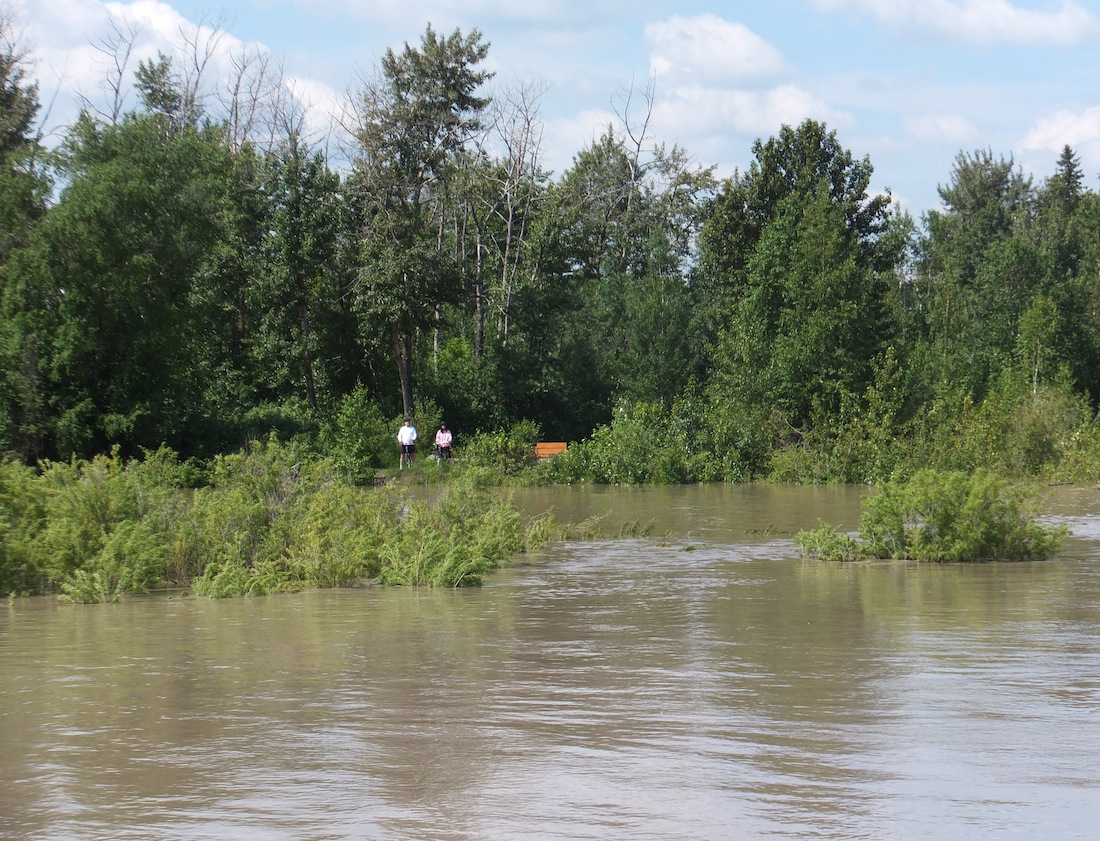 Can you tread water?