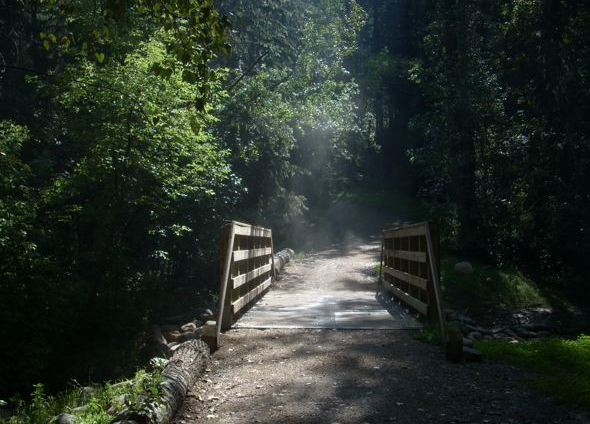 It had its sweet, beautiful moments, but for the most part, today’s walk was an exercise in frustration. Still trying to find an alternate ‘long’ walk for Maggie and I, now that the Whitemud Creek entrance nearest to us has closed. Without using a car, the only possibility is a walk that is one third ravine, and two thirds white hot suburban sidewalk. Strolling through my old neighbourhood in Strathcona/Mill Creek yesterday, I was reminded how wonderfully shaded it is amongst all the elms and old-growth trees canopying the narrow streets. A walk along these cool, verdant paths is relaxing. A walk in my current neighbourhood often feels like I’m being hammered. I love the sun, but there is no relief.

However, we did get a long walk. Poor Maggie. She’s feeling glum, probably from the heat and the fact that four members of her pack are in Victoria this long weekend. Her tummy is clearly upset, because she threw up on someone’s exquisitely manicured lawn in Westbrook (just after she took a shit on it.) So, the walk wasn’t without it’s amusements, but the frequent stops for various evacuations both in Westbrook and especially in Whitemud Ravine meant we were swarmed by mosquitoes. I sprayed myself with noxious chemicals prior to the walk, but that didn’t stop the buggers from flying around me, if not actually landing. Maggie, on the other hand, was viciously attacked, but didn’t seem too bothered. I wiped her snout a few times to clear the mozzies from her face, which made her lick my hand with her barfy tongue.

When we turned toward the Aspen Gardens exit, the little bridge was encased in what looked like smoke, but was actually fog. I’d heard that there was fog about, but didn’t see any in the ravine until that very moment. In the sunlight, the fog appeared to be rolling gracefully out from under the bridge. It was very cool, and lovely in an oddly isolated, ethereal way. Tried to capture it on film, but I have no setting for ethereal.

The trail to Aspen Gardens is short but steep, and once we started ascending, Maggie was almost running. I think she felt energized by the extreme wetness of the path (it rained yet again last night), and by the puddles which were deep enough for a few slurps. Once we emerged from the ravine, I stayed right as per the instructions given to me last week when we got lost. Got lost again. Stupid. We ended up back in Westbrook, basically retracing our steps under a blazing sun. I apologized to Maggie but by this time she was as intent on getting the hell out of there as much as I was, not evening stopping for a pee. My grumpiness was alleviated by a few slices of Friday’s pizza and a cold beverage. I miss the shade. And I miss the old entrance to Whitemud.