Spent three and half hours at work this morning, so to reward myself for heading into the office on a Saturday (other than the Ice Capp), I walked to Emily Murphy Park and played around on the trails. Or trail, as there’s only one as far as I know, and it’s a beaut! On a hot day, the trail that runs along the river is an outrageously green and cool drink of water. It’s been awhile since I’ve walked down here, a path so close to the North Saskatchewan that I once fell in during a snowy winter day (more like I rolled in.) No problems today, but lots of other people with the same idea. In spite of the company, it was very relaxing, and a welcome respite from the heat. 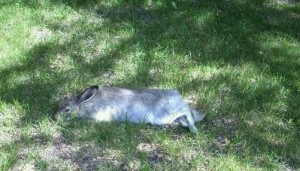 When I got to work, three hares were lying in the grass on their stomachs, either cooling off, or getting some sun. Hard to say, the light was pretty dappled. From a distance, they looked dead, so I was relieved when one opened his sleepy goat eye, followed by the others. Too relaxed to even bother sitting up. I know the feeling.

Once I emerged into blinding sunlight from the comparative darkness of Emily Murphy, I wandered around dragonfly alley for awhile, but didn’t find a single one, sadly. Not many mosquitoes around mid-day…which means, no dragonfiles. Then, across the LRT bridge to the legislature grounds. Some kind of festival going on there, but like the bunny, I was by that point too hot to give a shit.

It really felt like summer today. Once my walk was over, I’d almost forgotten that I’d been at work.