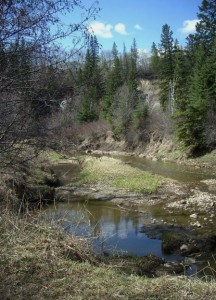 A splendid, bee-loud walk on a hot, spring day. Maggie and I left in the morning to avoid the heat but it was already there at 10:30. Went through Westbrook into Whitemud Ravine, and then over to Snow Valley. Managed the one steep hill that is much easier to ascend than descend. A little scary in places, but I managed to stay upright. Maggie availed herself of every entry point into the creek, and was a soggy, happy mess after the first hour. I envy her. What a delightful way to cool off…if only fetid beaver water didn’t bother me!

At the top of one of the hills, Maggie stopped to stare at something in the woods. When I looked, I could see the dark back of a slightly rounded shape, but I couldn’t quite place it. Maybe a deer, but the back seemed too dark. I suppose the other possibilities are a moose, or a slow-moving hobo. It was too dense to get a good view, and as soon as I tried to move closer, the sound of breaking twigs made the thing, whatever it was, disappear. By that point, Maggie was half way down the path and impatient for me to follow. She has fleeting interests in such things. If it’s not going to feed her, walk her, fluff her pillow, or pet her, she could care less. Such a simple creature.

Got my first burn of the season. Just a little shoulder action, but enough to give evidence of the day. Lots of bugs outside now, especially fat bees. I don’t know what their food source is in this flowerless landscape, but my forehead seems to be an intriguing possibility. I wouldn’t expect them to bite me, but I seem to attract them like flies. Flies with striped fuzz and stingers. It’s OK, I don’t mind.