The new and improved Dawson Bridge

A marathon two and a half hour walk today. Took the path that runs parallel to 98th Avenue, walked around McNally High School, stopped to pet a dachshund, over to the newly refurbished Dawson Bridge, and then into Riverdale. As I’ve mentioned a few times before, Riverdale is my second favourite neighbourhood in the city, next to Mill Creek (sorry, the godzilla water fountain tips it over the edge.) In the last few years, there has been a lot of development in Riverdale, in the form of giant condo complexes and massive houses. It’s still got that quiet, Mayberry feel about it, but the mix of old and new is tipping heavily toward the new. While the Dawson Bridge was undergoing a major de-rusting, I avoided that particular route. Compared to what it was, the new bridge looks spectacular. Good job, folks. The beams are sparkling, and coincidentally, the same colour as my toenails. Not sure about either choice, but I’m sure it made sense at the time. 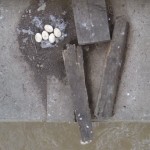 The case of the missing goose

Stopped on the footbridge to check out mother goose, but she was once again absent from her nest. Sure, a gal’s gotta eat, but I hope this isn’t a repeat of last year. Five eggs in total, which seems like a lot, but I’m not sure they’ll hatch. Last year, the eggs just disappeared all of a sudden, after the mother was gone for several days. I have a feeling the nest is being watched, which is probably a good thing. As cool as it is to observe this family of geese every year, I kinda wish someone would give Ms Goose and her eggs a ride to Hawrelak, where I think most of the geese in the city lay their eggs. At least the goslings would have a soft place to fall. On the other hand, maybe the peacefulness of Louise McKinney Park is preferable to Squawksville.