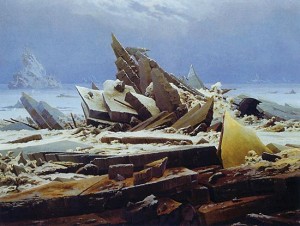 That’s Romanticism…not romance, in spite of all the squawking in the bushes. Giant plates of ice have piled up along the shores of the North Saskatchewan River in a way that is reminiscent of the great German Romantic painting, The Polar Sea by Caspar David Friedrich. Unlike the great German Romantic painting, Sir William Parry’s wrecked ship was not amongst the sheets of cracked and dirty ice. A few seagulls, and a duck, but no 19th century sailing vessels.

The scene near the Low Level Bridge was much more spectacular yesterday, but of course, my camera was

not in my backpack. Today, under pressure from sun and undertow, the Romanticist Ice Jams have morphed into Impressionist Ice Chunks, which are not nearly as impressive, but then Romanticism always trumps Impressionism. Take that Monet and your stupid, stupid haystacks.

I’ve been trying to walk about 90 minutes every day. It’s a preemptive move on my part to negate effects of the looming Mr Fruit ‘n Nut weekend, otherwise known as Easter. My boots are killing me on the cement, but the unpaved paths in Mill Creek are still incredibly mucky. A pleasing, squelching sort of muck, I must say, but not fit for running shoes. I’d rather trash my three-year old boots than my new Sauconys. Maybe by the weekend I can retire my boots for the season or at least until the blizzard hits in mid-May.

Saw a fly sitting on a pile of gravel in the gutter. I found it oddly cheering. Spring is well and truly underway.