A view of the Cloverdale Bridge from the park

The usual suspects: businessmen in suits. I don’t want to cast the net too wide, progress is driven by people with vision, including businessmen (and women), but this unassuming little park is once again being carved up like a well-done turkey, or a turducken, as McKinney Park is a mashup of forms squeezed into one tasty, slightly unfocused package. The east end (with the rose garden) is about to be demolished for the LRT expansion, and now the west end is ‘under consideration’ for further Convention Centre development.

As an empiricist, and more importantly, as an empiricist that lives, works, and plays in the afformentioned area, I have reached the conclusion that park space in the vicinity of downtown is an anathema to the city of Edmonton. It’s just too damn tempting for developers, not easily valued, at least in terms of dollars, and it’s…well, green. 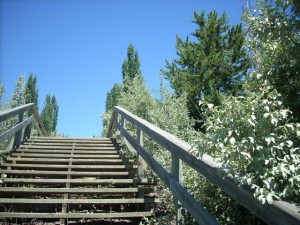 One of many wooden staircases in McKinney

former incarnation, the new Churchill Square has a quantifiable purpose, or purposes. In fact, they should rename it Liver Square; it has a thousand functions, it’s asymmetrical in a rather unattractive way, and it smells a bit after the weekend. The Square is home to many events and festivals throughout the year. It’s also a place to eat a hot dog, skateboard, buy theatre tickets, and perform or observe any number of crowd pleasing and occasionally illegal activities. From the west, the grandstand completely obscures the view of the giant, metal pavlova, otherwise known at the Art Gallery of Alberta, but whatever. There was nothing spectacular about the former Churchill Square. It was green, and it had benches. Also, many drunks, which is where the new and the old come together. I’m not grieving the old square at all, really, but now that it’s paved over, there is no other green space in downtown Edmonton, except Louise McKinney Park, which is technically in the river valley. However, it’s directly below Jasper Avenue and for the people who work and live downtown and are so inclined, McKinney is a real park, with paths to stroll and trails to run, benches, bees, picnic tables, and the river. It is a respite from downtown, but it is nevertheless, part of downtown Edmonton. 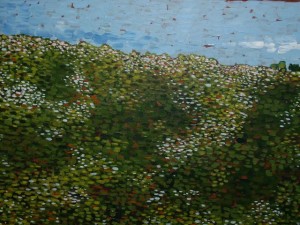 a painting of the original Louise McKinney Park by Donna McKinnon

Like Churchill Square, Louise McKinney Park has undergone many ‘rethinks’ over the years. When I started walking along its paths close to 20 years ago, the hill was nothing more than a verticle field, with a few intersecting paths. The weeds and wildlflowers were it’s main, and only, feature. I thought this was enough, or it was enough for me. Apparently, I am not a typical demographic. I walk, that’s it. It’s my only form of exercise, and visually, a field of bee-loud wildflowers is about as good as it gets. This little parkette, in its modest form, made me happy for years. Recently, I have watched Louise McKinney Park change from a place of limited (but appreciated) function, to a place of multi-functionality, like the new Churchill Square. Unlike Churchill Square, it’s still mostly green. The wildflowers (and weeds) are gone, but they’ve been replaced by a rose garden, more trails, more trees, a dock, a promenade, an ampitheatre, and various other additions, some of which are inexplicable, but all have been in keeping with the idea of a park. There are many more things to do here now, although I suspect that the main users, like myself, still enjoy the park in the old way, as a spirit-lifting transition from city to river valley, a corridor of peace and beauty a breath away from the heart of downtown. Once Bob the LRT-Builder moves in later this year, all that is gone. Permanently.

And now, apparently, it’s time to gut the other side of Louise McKinney Park. It’s very early in the planning stage, 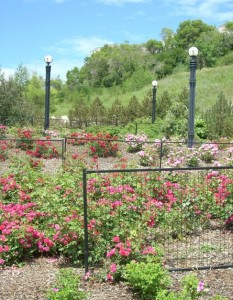 I beg your parden. The McKinney rose garden.

and I’m pleased to hear that Mayor Mandel is not in favour of this downward development into the river valley. It may never happen. But I have to say I am tired of this theory that development equals improvement, and in this particular case, that the proposed convention centre expansion will in some way ‘be-jewel’ the river valley. The LRT bridge by the University certainly did not bedazzle the riverbank. It’s a utilitarian structure. It has function, but no form. None of the LRT stations throughout the city, including the most recent additions, make the slightest attempt to enhance or integrate within the surrounding areas. Function, but again, no form. 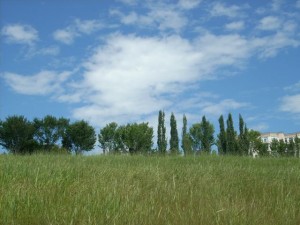 There is a lot of ugly in this city. It’s not that I am against development, I am just wary of the lack of vision, and this strange, hypocritical attitude the city managers have toward the river valley, the true gem of this city. Short of prostrating myself across the proposed field of destruction about to be inflicted upon the east end of Louise McKinney Park, the Cloverdale Pedestrian Bridge, and the Muttart, the LRT development into this part of the river valley appears to be unstoppable. The cost will be huge, and irreparable. If the Shaw Centre is allowed to spill over into the other end of McKinney, it will cease to be park, the last bit of green space in downtown Edmonton. Some folks will neither notice nor care about this loss, because a few less hectares of grass means a thousand more conventioners gobbling up our goods and services. But you know, they can do this anywhere, from any location. Shriners have vehicles, I’ve seen them. Is it too much to ask to leave this bit of green grass, this humble little oasis, alone? Spare us more ‘bejeweling’; further development is not required to get people to visit Louise McKinney Park. Perhaps a little advertising, maybe something that showcases what it is now, a beautiful, if not tragically imperiled park in the heart of downtown.