I’ve lived almost my entire life in Alberta, visited the mountains many times, and yet, I’ve never been to Canmore. Maybe it’s the name. Not a particularly lovely moniker for such a beautiful town. Sounds like a meat-packing plant. And why isn’t Canmore mentioned in the same breath as Banff, Jasper, or even Kananaskis? The mountains are just as stunning, and the town is alpine-quaint. Canmore is obviously the quiet one in the family.

I’m spending the Thanksgiving long weekend here, and so far, I’m very impressed. Canmore is an old coal-mining town, which explains the dark soil and hunks of coal along the Bow river. As this is not a national park, I stuffed my pockets with a few ‘beach’ finds, like the coal, and a few other interesting rocks and pieces of driftwood. Can’t say that national park status ever stopped me from filling a pocket or two in Jasper, but I try to be respectful of the law, where possible, and when I remember.

Further up the banks, we found a couple of abandoned mine shafts, and an old, stone shack. Judging by the interior paint job, 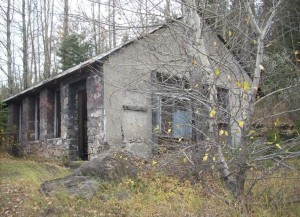 or lack thereof, I would say this building has not been officially occupied for many years, aside from the ungulates who have left evidence of their wanderings on the floor, and of course, teenagers, opting to leave their calling card not on the floor (as far as I know), but on the walls, just like teenagers everywhere. How they love their pressurized paint products.

This morning we visited the local dog park, which is a pretty spectacular setting for canine shenanigans. Canmore is very much a dog town. A walk through main street is like a mini-Westminster Dog Show, without the goofy commentary and the ankle-length skirts. Lots of drive-by licking (dogs) and quick fondles (me.) Many people were walking around in shorts and t-shirts. If it wasn’t for the preponderance of pumpkins and yellow leaves, I’d swear I was on a summer holiday. After the dog park, we crossed Spray Lakes Road, and entered the Canmore Creek Trail, which is quite lovely. In my brief introduction to the trails in Canmore, the easy trails, most of them eventually intersect with a house, or a collection of houses. Again, because Canmore in not a national park, there are fewer restrictions on building, resulting in lots of peaked-roof, alpine inspired houses and condos sprawled across the Bow Valley basin. It’s almost like a Swiss village, without the chocolate shops and the political neutrality.

Anyway, back to the trail…we were able to find a path adjacent to a little waterfall and a mountain stream. It was beautiful, and somehow deeply meditative. Something about the sound of rushing water, and the coolness of the spray. In the middle of October, there is still a deep carpet of moss on the rocks and up the sides of the riverbank. Even a few flowers here and there. Hard to think of turkey and root vegetables when all signs are pointing to midsummer.

No encounters with wild animals thus far, which is just as well. With regard to bears, as my dad used to say, you only have to be faster than the slowest runner, and I’m not sure that I can lay claim to that ability anymore. I have seen the usual assortment of magpies and squirrels, but nothing hooved or clawed, other than a few feral cats, which apparently are a problem in town.

All I really want to say is, Canmore, I heart you.