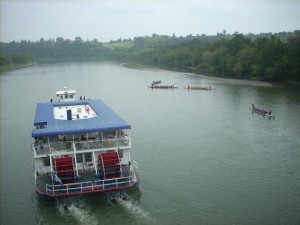 Stupid me, I thought the smoke was from the forest fires, but it’s the fire-breathing dragons in Louise McKinney Park! No, I did not actually see a dragon breathing fire, but man, are they good swimmers, gliding smoothly and swiftly across the grey waters of the North Saskatchewan River.

It was the final day of the Dragon Boat Festival at McKinney. I’ve been watching the dragon boaters practice for weeks. They have all sorts of interesting shouts and commands. A few times, I felt compelled to pick up my pace, even though I was just wandering by. They’re a powerful (and persuasive) lot, those dragon boat people. Somehow, the smoke-filled skies seem appropriate for the occasion. 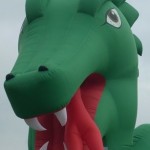 Hung around on the pedestrian bridge for awhile, but didn’t see a race. The Queen had entered the fray, and the dragon boats were appropriately deferential. My guess is the races will have to be re-located next year, and the year after that, if the LRT construction demolishes the eastern half of Louise McKinney Park, as scheduled. If only we had real fire-breathing dragons, it might keep the earth-movers (and a certain legacy-crazed mayor) out of the river valley.

The horizon is still smudged with smoke. I began my walk bathed in the cool, misty atmosphere of a mid-Autumn 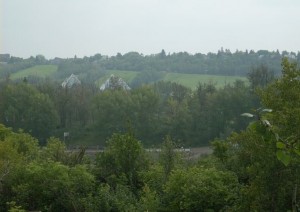 day, but 90 minutes later, it had reverted to a garden-variety, overcast summer day, with a fair amount of humidity for such cool temperatures. The sun occasionally peaked out from the veil, and while it’s no longer casting orange shadows, it’s still a tepid version of it’s former self. Supposed to warm up again in the next few days, which will be nice. Not quite ready to give up on summer.