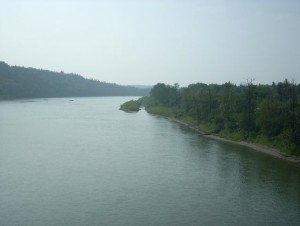 A hazy shade of summer

A hazy day, both mentally and climatically.  The river valley in soft-focus. Quite nice, actually. Humid too. Long walk today, about 90 minutes. The heat is back, but with gauze around the sun, it felt less punitive.

Starting at the east end of Rossdale, just on the other side of the Low Level Bridge, I could hear someone’s voice in the distance. Typical girl-folksinger stuff, which makes sense as the Folk Festival begins tonight. I’ve been watching them set up for two weeks, but even if I hadn’t, the dead giveaway would be all the people walking towards ‘the hill’ this afternoon with chairs

strapped to their backs. Or to be more exact, chairs  strapped to backpacks strapped to their backs. I was conspicuous without a chair, especially when I veered right while everyone else veered left, but…I’m not going to the Folk Fest this year. My ass insisted. Begged, actually. So, although I will be abstaining from the annual sitathon, I expect to walk by the site several times over the next four days, chairless yes, but with an appreciation for the familiar sounds wafting through the air. And a pain-free posterior.