I’m not sure if it’s wise to walk at noon when the temperature is 26C and rising, and there is not a single cloud in the sky, but having recently pooched my iPod Touch in the rain, I doubt I’m the best person to consult on issues related to weather, or judgement, for that matter. So, I walked, at noon, in the bright sunshine, and it was spectacular.

Started at Laurier off leash, which is considerably more lush than the last time I was down that way. The trails I took were mostly in shade, and in the areas where the sun was intense, wandering bands of wet doggage provided sprinkler-like relief. 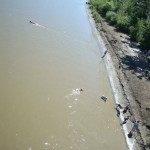 Where dogs go to get that 'wet dog' smell...

Headed over to Hawrelak, but straight to the path that runs along the river, not the actual park. I did pop out briefly to take some shots of the geese (ducks, seagulls, etc.,) by the lake, but the lure of cool shade drew me back into the bush. The park, as one would expect, was packed with semi-naked people and the sweet, sweet smell of BBQ weenies.

The river-adjacent trail at Hawrelak leads directly to Emily Murphy Park. Lot’s of smoking weenies here too, but not as much exposed flesh. It’s a much shadier park, and not a lot of places to prostrate yourself. Surprisingly, the path was not mucky at all. I was expected lingering pools of water from the rains, but it was clear and cool. The really hot part of the walk started at Kinsmen. As far as I know, there isn’t a river trail…just road. Could’ve taken the trail on the far south end of Kinsmen but it was out of my way, and at 90 minutes and counting, I was not interested in adding any extra minutes to my walk. Tried taking the bike path east of the Walterdale Bridge, but it was definitely too wet, and so narrow that if a bike came along, I would’ve had to take a dive into the brush, and I’m not really a dive-taking kind of gal. Found a hill of least resistance and pulled my way up to the main path, taking out some clumps of grass along the way. Rest of the walk through Skunk Hollow was uneventful, other than my rising body temperature. I did spot a falcon, maybe a Peregrine, flying over the field. 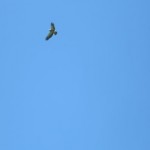 Pocket digital cameras are great for carrying around on my walks, but they are definitely lacking when it comes to photographing falcons.