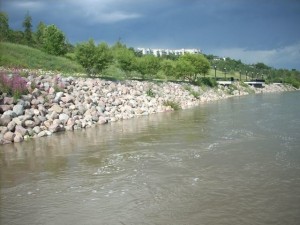 A pier-eye view of McKinney

…in spite of the mocking thunder clap just as I stepped outside. In spite of the darkling clouds looming above my head. In spite of the fact that I had defiantly left my rain jacket at home. It did not rain. Hallelujah. Hallelujah. However, I was sans my iPod Touch, which got damaged in the deluge on Monday. For future reference, backpacks do not wick the moisture away. In fact, they are quite permeable to the rain, but a bit stingy about letting it out. I estimate my backpack can hold about a cup of rainwater in its numerous voids, which of course, is where my iPod migrated to during my brief but spectacularly wet walk home on Monday. Also for future reference, if an iPod gets wet, do not: a) turn it on, or b) shake it madly to get the water out. Currently, it’s in a semi-vegetative state, able to play music on my dock, but unresponsive to my touch. How very deflating. 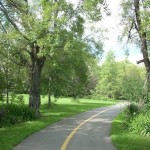 Good news is that lovely Rossdale is now caterpillar-free. Walked through there today for the first time in a month, and didn’t spot a single air-borne worm, green or otherwise. It’s quite possible that it’s been wormless for days, or even weeks, but I was too worm-wary to test the possibility. The ash trees take the brunt of the infestation, but they do not appear to have suffered nearly as much damage as in previous years, suggesting perhaps, the experts are correct…maybe this long, dark night of the worm is over. This ten year long dark night. In any case, I’m thrilled to get the Rossdale trail back. It’s beautiful, and it’s conveniently connected to several other major trails in the river valley.

Over to McKinney, where the skies were absolutely black and poised for violence. I stopped anyway to take a few shots, including one from the dock on the north side of the river. The water is so high, another rainstorm or two and it will be completely submerged. The cool thing about standing on the dock when the river is high and fast is that it feels like the dock is moving. I’m all about the cheap thrills. After a few minutes, started to feel a bit barfy, so I returned to the mainland.

The storm stayed east for the last 40 minutes of the walk, and I stayed dry. With the exception of a few sweaty bits, of course.