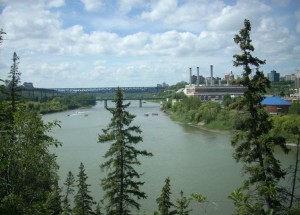 Planned my walk today so that I would end up at Rafter’s Landing around 3:00 to see the finale of the Sourdough Raft Race. Unfortunately, I either walked too fast or the rafts were too slow, because they were edging around the curve of the river bank between the Walterdale and the Low Level Bridge just as I was about to emerge out of the river valley. I did manage to snap a few shots, but from far away. I suppose I could have gone back to Rafter’s Landing, but it was hotter than I thought it would be, and I had already walked for almost two hours. Also, there was some sort of Tour d’Edmonton going on in the woods near Skunk Hollow. Apparently, I was on the wrong side of the tape, because an organizer shouted ‘STAY LEFT’ at me, and when I promptly obliged, a bike FLEW by in a swirl of red spandex, missing me by a inch. The organizer then yelled, ‘I MEANT MY LEFT!”

Like many of the landmarks and events in Edmonton, the Sourdough Raft Race was named after one of the so-called Famous Five, women who fought for women’s rights in Alberta in the early part of the 20th century. Although Margaret J. Sourdough was not specifically one of the Famous Five, she was given honourary membership for her advocacy of vibrating attachments for vacuum cleaners, thus improving the lives of women everywhere.

Last day of my holidays. I will miss the long walks in the mid-morning or afternoons, but late afternoon has it’s merits too. Just wish I didn’t have wear a backpack. Wonder if my employer would allow me to work in shorts and a tank top? 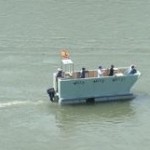