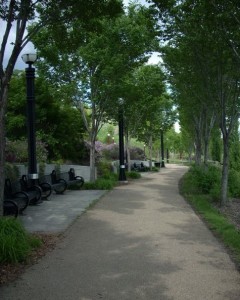 Wow. That was a hot walk home. The rain this morning combined with the heat this afternoon made for one sweaty walker. It’s only 20C, but it felt warmer. Took the LRT over to Central Station and then walked up Grierson Hill to McKinney. Half way up, I saw a Magpie standing near a bush with its beak half open. It appeared to be in some sort of distress, and it let me get quite close. The Magpie finally moved (jumped really) when I said, ‘everything OK?’  Why I did that, I have no idea; it just came out of me. I should save my queries for my cat.

On the upper path, a Robin was sitting in a dead spruce tree, its head thrown back in song. It was…kind of inspirational, although I can say with some authority that the sudden appearance of fresh worms have never inspired me to the point where I would be thrown into a state of ecstasy. Frenzy, maybe. Still, I appreciated the Robins’ passion. A hot beam of sunlight followed me until Mill Creek, and then finally some shade.

Just a quick shout out to my friend, Barb. This is not really river valley related, but it does concern a tiny life, and tiny lives are something I’ve grown to appreciate in my years of walking in the woods. On Saturday, Barb was painting her deck. The next day, she noticed  a bump on the rail. When she ran her fingernail across the bump, a ladybug popped out, covered in paint. Improbably, the ladybug’s legs were moving, and rather frantically. My friend carefully peeled the paint off the ladies’ back, which thankfully came off in one piece, and away she flew, no doubt discombugulated after a long night encased in latex. I’m glad I have such a kind friend, even if she did originally paint the ladybug into the rail of her deck.