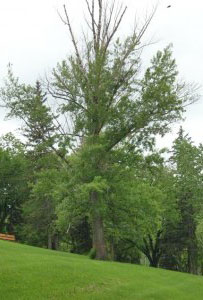 Several recent articles in the Edmonton Journal have addressed the dire state of Edmonton’s tree population, a consequence of ten years of drought. Hard to fathom as we face our 93rd straight day of rain, but I see evidence all around, especially in the river valley.

There are many broke-back trees along the trails, due in part to the dry conditions, but also from the hellacious wind storms that go hand in hand with drought. I hear a constant creaking in the canopy, making me wary of what’s splintering above my head. I see  graveyards of branches, like blackened bones on the forest floor. Stand anywhere in the river valley and it’s easy to spot the dead spruce trees; grey and lopsided, interrupting the ribbon of green with such regularity it’s as if they’re being systematically erased.

According to an article printed in the Edmonton Journal on June 7th, many trees are experiencing dieback, a condition where ‘…living trees have an abnormal number of dead branches.’ Didn’t know it had a name, but it’s endemic in the river valley. In the park adjacent to Lavigne Road (Skunk Hollow), there is a stand of poplar trees on a hill that reminds me of a Corot painting; exceptionally tall for the area, deep green in the light of day but ablaze with gold when the setting sun streams through the ravine. One tree in particular, the tallest and most striking of the poplars, has dieback about a third of the way down from the top. It’s particularly evident on this tree, but most of them have it to a certain degree, and at least five have orange ribbons around their massive trunks. As with some of the old elm trees on Whyte avenue, an orange ribbon means death by chainsaw. Or perhaps they’ve been targeted for rehabilitation? Either way, it’s heartbreaking. These strong and beautiful trees, plucked from oil paintings, now palliative, like so many others.

don’t tie a ribbon around this old poplar tree

During another severe drought in 2002, a fire decimated an area in the north end of Mill Creek Ravine. It was a big deal in the neighbourhood, with fire trucks up and down the street, and people cranking their stereos to drown out the din of the sirens. My father called and said, “You’re not gonna walk through there, are you?” No dad, I try to avoid burning bushes, metaphorical and literal. I did take a peek a few days later, and even though the fire was relatively contained, the burn zone was extensive. A house was lost and a huge swath of the upper trail was burned to the ground. For years following the fire, that area of Mill Creek smelled strongly of men’s cologne, which is why, on occasion, a walk along that particular trail kinda turned me on. (“It’s not you, it’s the trees.”) Apparently, charcoal is the secret ingredient in grooming products. 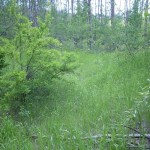 Eight years later, the area is lush again. The new growth is still dwarfed by the black spires of the old, burned trees, which continue to fall over as the healthy undergrowth edges out the dead roots. But, for the uninitiated, it would be hard to tell that a fire leveled this part of the ravine less than a decade ago. It didn’t take long for new life to sprout, but in those first years I remember how startling it was to walk out of the cool oblivion of overgrown foliage into the unfilitered sunlight of a burned out landscape.

There is cause for concern, but not despair. The river valley is mostly alive, moderately well, capable of rejuvenation, and at the moment, deliciously green. And on a hot day, it still smells like men’s cologne in Mill Creek.