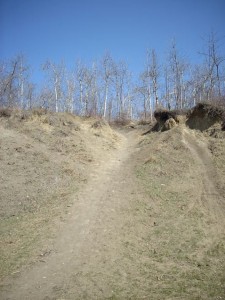 I was walking along one of the upper trails in Mill Creek when a biker stopped to say a coyote was on the adjacent trail. I said ‘thanks’ and turned around. It occurred to me later that he may have been trying to warn me, but as I am neither a poodle nor a small child, coyotes don’t scare me. I hear them all the time in the ravine, but I rarely see them, and I wasn’t going to pass up a chance to see one up close. I walked to where the biker guy had pointed and spotted the coyote almost immediately, wandering through the bush. He was relatively far away and quite blendy with his surroundings. If the coyote saw me, he chose to ignore me…not being a tasty poodle or an even tastier small child. Very cool.

Also spotted a couple of yellow birds (possibly goldfinches or warblers) and either a hairy or a downy woodpecker, but it was hard to tell from a distance. It seemed neither hairy or particularly downy…just ferociously intent on pecking out whatever was napping below the bark of the tree.

I started my walk in Rutherford Park near Mill Creek Pool. It’s particularly lovely through there, with the three wooden bridges spanning the creek (which is still mostly frozen) and the meandering trails along either side. This is the area I saw the moose last year, and so every time I enter the park, my expectations are unfairly raised. It’s still the same park it always was, which is great, but now that it’s  been moosified, I can’t help wondering, what other treasures might it attract?

It was a perfect day for a walk. Still a bit cool and windy, but the sky was blue and I got to see a coyote.

1:00 PM/-3C (poor Godzilla was sitting in frozen water today, but at least he was wearing a rather fetching yellow scarf)